Jason David Benchimol 30, of Fayetteville, North Carolina, died February 6, 2017. He was born March 6, 1986, to George and Heidi Benchimol. He attended Oak Hall High School in Gainesville, FL and graduated with a Bachelor of Arts in Marketing Psychology and Minors in Creative Writing and Chinese from the University of Central Florida in Orlando, Florida. Upon graduation, Jason elected to serve his country and joined the U.S. Army. There, Jason attended Advanced Individual Training (AIT) at Fort Huachuca, Arizona where he received an Associates of Applied Science degree in Intelligence Operations Studies from Cochise College and earned his Occupational Specialty as a UAV Operator. In his career, Jason was given the opportunity to attend the U.S. Army Ranger Assessment and Selection Program (RASP) where he was selected, graduated, and scrolled as a U.S. Army Ranger. His graduation at Fort Benning, Georgia, where he donned the tan beret in front of his family, was his proudest accomplishment. Jason was asked to give his brother, Matthew, his First Salute when he commissioned in 2015, as a 2nd Lieutenant in the U.S. Army.

Funeral arrangements are under the care of Forest Meadows Funeral Home in Gainesville, FL. The funeral service will be held on Tuesday, February 14, 2017 at 1:00 pm at the sanctuary in Forest Meadows Memorial Park Central, 4100 NW 39th Ave. Gainesville, Fl. 32606. To leave online condolences, please visit the online website at www.forestmeadowsfh.com.

In lieu of flowers, the family asks that you consider donations to The Wounded Warriors Project in Jason’s name.  https://support.woundedwarriorproject.org/default.aspx?tsid=7792 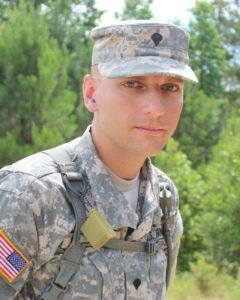