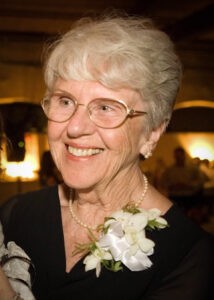 It is with great sorrow that we share the passing of Jean Haviland Galardy on April 24, 2022 in Gainesville, Florida.

Jean was born on January 27, 1930, in Bridgeport, Connecticut to parents Earl Leroy Haviland and Mildred (Schlump) Haviland. Jean was raised in Stratford, Connecticut and was the loving older sister to Valerie “Corky” (Haviland) Downs. She graduated from Bridgeport High School and later from Bridgeport Hospital School of Nursing. While working at Bridgeport Hospital, Jean met the love of her life, José Angel Galardy, a young resident physician originally from Cuba. Jean and José had a love stronger than cultural differences or language barriers, and were soon married on June 16, 1951, in Stratford, Connecticut. Not long after the wedding, the young couple moved to José’s hometown of Bayamo, Cuba to begin their lives together. Jean was warmly welcomed into this new family and culture, quickly becoming fluent in Spanish and excelling at cooking the most authentic Cuban meals. In Bayamo, the couple welcomed their first son, Joseph Earl
Galardy on May 14, 1952. While life in Cuba was full of the richness of culture and family, Jean and José were forced to flee during the Cuban Revolution. They ultimately settled in Woonsocket, Rhode Island, which became their home for the next two decades. In 1970, Jean and José expanded their family with the adoption of a one-month-old baby boy they named Paul John. The Galardy family was now complete. While raising the boys in Woonsocket, Jean volunteered her time with meaningful organizations including Meals on Wheels, Hospice, and the Woonsocket Hospital, where José was Chief of Pathology (now part of Landmark Medical Center). Jean was active in the Catholic Church and was an incredible homemaker, doting on her sons and hosting some of the most lavish parties for friends, family, and hospital colleagues. Upon Jose’s retirement in 1990 and having tired of the cold New England winters, Jean and José relocated to Tampa, Florida where they spent twelve enjoyable years. In 2002, they made their final move to Gainesville, Florida to be closer to family and friends. Jean continued her volunteer work, became an active parishioner at Holy Faith Catholic Church, and was a key member in community organizations, including the ‘Club de Amigos,’ a social club bridging friendships and providing support to families from Spanish-speaking nations around the world. The Club’s members became many of Jean and José’s closest friends. As Joseph’s and Paul’s families continued to thrive, Jean ultimately became the proud grandmother to five grandchildren and nine great-grandchildren. Known as “Grammy” to her grandchildren, Jean is remembered for welcoming each baby with a hand-crocheted
blanket and marking each birthday with a sweet serenade. She loved passing down the family’s rich Cuban heritage to her grandchildren through her stories, memories, and beloved recipes.

In 2006, Jean suffered the unexpected and untimely loss of José. She was extremely grateful for the loving support she received from her family and friends from near and far.  Jean was
joined in 2010 by her oldest son Joseph, who retired and relocated to Gainesville. The two lived together providing mutual support until the unexpected passing of Joseph in January
2022.

Jean is survived by son Dr. Paul John Galardy and his wife Dr. Christine (Woldin) Galardy; former daughter-in-law Marian (Carson) Galardy; grandchildren Chrissy (Galardy) Selva and husband Mario, Jo Anne (Galardy) Bradley and husband Eric, Tyler Galardy, and Alexander “Xander” Galardy; great-grandchildren Carson, Camren, Cassidy, Hank, Juliet, Truman, Carlo, Gus, and Billy. Jean loved to cook, crochet, read, and gaze upon the ocean. She lived her Catholic faith with passion and grace, and she was an inspiration for courage, compassion, and resilience. Jean’s love of family and of Cuban culture live on, as do her treasured friendships that endured across many miles and decades.

In lieu of flowers, please consider a donation to Haven
Hospice (https://beyourhaven.org/donate).