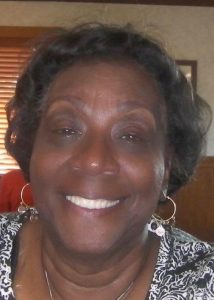 Joan Yvonne Carlyn Edwards Canton was born on March 1, 1941 to the late Wilmot  and Agnes Edwards on the island of Antigua, in the West Indies.   At the time, her father was the Chief of Police of the Leeward Islands, which necessitated the family to move to various islands at various times.    At the age of 5 the family relocated to the island of St Kitts.  As a child Joan lived in the Cardin Children’s Home in Basseterre, St Kitts for over 9 years as her father prepared for her and her sister’s Eloise (Weezie) arrival to America. Joan left her beloved island of St Kitts at the age of 14 to come to America and be reunited with her father. They lived in The Bronx, New York City.  She enrolled in Morris High School where she attained her high school diploma.

While on a blind date at a dance in 1961 with a young man, a baseball phenom out of the US  Virgin Islands, who was drafted (and then undrafted) by the Dodgers,  unbeknownst to this couple that cupid’s arrow would not only strike them, but weld them together for over 45 years!  She married the late great AlricOrlando  Canton also known as Rico.   They moved to Brooklyn, New York to begin their lives together.   From this union came 5 beautiful daughters; Lisa Marie; Kim Andrea, Dana Michelle, Joi Renee and Erika Lynn.  In addition to being a surrogate mother to many, most notables are Eva, Ebony, Mahogany and Theo Almonds, Ann Henson, Keisha Grahamand multiple other children, too many to mention.    It was here in Brooklyn that she honed her masterful sewing skills, herbread baking talents and the “art” of making porridge.   Always a pioneer, she insisted that her daughters  were well educated, participate in ballet, Broadway plays, stayed true to their Caribbean heritage and were given experiences that as a young child, she did not have. A major book lover, she insisted that her daughters read for both pleasure and at times, pain (when you didn’t want to).  Yes, she was a disciplinarian!!

Joan worked as a Clerical Assistant with the American Kennel Club.  From there, she worked as a Medical ClaimsExaminer with Blue Cross Blue Shield.  While raising her children in Brooklyn, she  returned back to school – The College of New Rochelle and earned her Bachelors of Arts Degree (with Honors) as she would proudly state!

Joan relocated to Gainesville, Florida and volunteered with the School Board of Alachua County. Afterwards, she became employed as a Caseworker with the Department of Children and Families, where she served many families.  She was a major resource to many of her families especially encouraging single mothers to continue their formal education, which many did. Joan attained information, resources and anything else she could do to assist her clients, who she loved dearly and they loved her.  She retired to take care of her ailing husband, and soon found out that she could not sit home too long, so off she was again.

Always an avid reader and insisting that  African American children needed  to  identify with themselves in the books that they read so that they too can develop  a love for reading, Joan was a major supporter and volunteer of Star Christian Academy  where she made herself the “Librarian” and stocked, maintained and worked the Library with love at the school.  She was a member of The Excelsior Matriarchs, The Red Hat Divas, The Order of the Eastern Star and many other organizations.

And then came SWAG!!! The Southwest Advocacy Group where Joan, along with Dorothy Benson and a few other volunteers bridged communities and became a resource for the community.  Joan was one of the founding partners of SWAG and was instrumental in coordinating, securing and  advocatingfor         services for the Southwest corridor of Alachua County.  She took great pride in her the annual backpack giveaways for the children of  Swag; (she selected each backpack individually and drafted her daughter Dana annually to assist), was instrumental of procuring other services/organizations as well, Girl Scouts, The Health Department Satellite Office, Bike Give-aways, Coordinating Toys for Tots, Serving as a Liaison between Law Enforcement, The University of Florida and any other entity that either served her community, wanted to serve her community and was adamant that her community was not to be exploited.  There were many other areas she served – too many to mention.    She strived to lessen the divide between The Have and The Have Nots.  She tried to level the playing feel within her community and offer them not just hope and a handout but solutions.   Her motto was “WE MAY NOT ALL BE IN THE SAME BOAT, BUT WE ARE IN THE SAME STORM”.