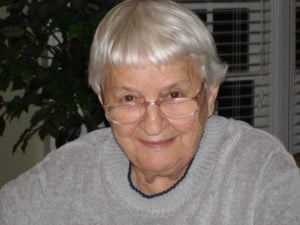 Johanna (Jo) Dallmann Bartz, 94, passed away peacefully on Friday, November 8th in Gainesville, Florida where she lived the past 32 years.

Jo was born in Lewisville, Ohio on March 17th, 1925 to Wilhelm (William) and Hulda Dallmann.  Jo spent her early childhood years in St. Louis Missouri.  The family moved to Carbondale Illinois in 1936 where Wilhelm was Associate Professor of Modern Languages and Chairman of the German Department at Southern Illinois. After graduating from University High School in Carbondale in 1941 she then attended college at Southern Illinois University and was a sorority sister of Delta Sigma Epsilon. She moved to Washington DC to work for the U.S. Army during” World War II, and after the war relocated to Chicago where she worked for the Chicago Opera and, while there, met John (Jack) Peter Bartz on a blind date. They married October 1st, 1949 in Webster Groves, Missouri and shortly thereafter, moved to Lake Worth, Florida.

Jo was preceded in death by her first-born son, John (stillborn infant), her husband Jack, son Douglas James Bartz and her two siblings, Paul and Lois.

Most notably, Jo was an active member of Grace Presbyterian Church, served as a volunteer (Pink Lady) at Shand’s Regional Medical Center, and was treasurer of her investment club.

She was a devoted wife, mother, and grandmother.  While in Lake Worth, Jack developed a passion for selling real estate, so he opened a real estate brokerage in his name.  Jo was always there to support him as well as provide the backend office operations and bookkeeping, while raising their two boys and maintaining the household.  In 1987, Jack retired and he, Jo, and Doug moved to Gainesville, Florida where they lived for the remainder of their lives.

A major part of her life was the caring of her son Doug with his challenges.  Doug lost his battle with brain cancer in June of 2018 after a very courageous two-year fight.  One of his wishes was to be honored with his beloved mother in a joint service, once she passed.  His second wish was to have is 1st cousin, Robert (Bob) Henrichs of St. Louis, MO, a retired Lutheran Minister, and Jo’s godchild, preside at the service.

In Lieu of flowers, donations can be made to Grace Presbyterian Church in Gainesville, Florida.