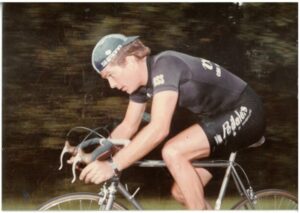 John K. Harlan, 67, of Gainesville, passed away peacefully on August 25, 2022, after a short stay at Haven Hospice following treatment for cancer.

John was born at Alachua General Hospital in Gainesville on November 21, 1954, to Bill and Madge Harlan. He graduated from Gainesville High School in 1972 and from Santa Fe Community College in 1984 after four years’ service in the United States Marine Corps at Camp Lejeune, North Carolina, and an honorable discharge in 1982. He attained the rank of Sergeant E–5 and earned the Navy Achievement Medal among other decorations.

John was a national-level bicycle road racer in his younger years, including cycling in Europe based in Ghent, Belgium, in 1976. He was known as a local legend as a road racer, winning the State road championship in 1976, and as a bicycle mechanic, beginning in high school and continuing until his illness in 2021. He was a longtime member of the Gainesville Cycling Club.

John was preceded in death by his grandmothers Estelle Harlan and Naomi Overstreet, and by his parents William E. and Madge O. Harlan. He is survived by his loving wife Catherine S. “Kati” Harlan of Orange Lake and his devoted son Samuel M. Harlan of Gainesville, and by his older brother William E. Harlan, Jr. and family of Micanopy.

A memorial gathering will be held at Forest Meadows Funeral Home, 725 NW 23d Avenue, Gainesville, FL, at 12:00 noon on Friday, October 7, 2022, with burial following at Forest Meadows Cemetery East on Hawthorne Road. In lieu of flowers, memorial donations may be made to the Gainesville Cycling Club.

Condolences may be left in John‘s on–line guestbook at www.forestmeadowsfh.com after his obituary.