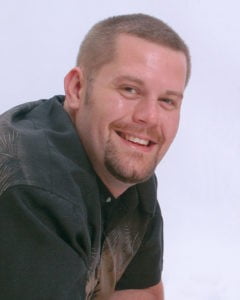 Joshua Michael Ewing, 40, of Gainesville, passed away on February 21, 2017, after an extended illness.

Josh was born on October 18, 1976 to Charles Michael and Susan Jan (Myers) Ewing.

Josh was a natural comedian. Through his facial gestures, body language and witty come-backs, he always strived to make people laugh. This comedic side often got him into trouble in school, which resulted in many notes on his report cards stating “disruptive behavior”, “talks at inappropriate times”, but Josh continued to be Josh.

He attended Buchholz High School, Class of ’94. While still in high school, Josh started working in food service, and continued there throughout his life. He became the night manager at Satchel’s Pizza in 2004 and worked there until 2015. He then went to work at Big Lou’s Pizza until he could no longer work due to his health. Josh was known and loved by his employers, other employees and many of the regulars.

Josh seldom met a stranger and strangers soon became his friend. Friends from school were friends for life. He never spoke bad about anyone and accepted each and every one for who they were.

Josh had a knack for the extreme, especially when it came to his cars. The older and bigger they were, the better. And the interior…red, black or purple velvet.

Josh is survived by his dad and stepmother, Mike and Elizabeth Ewing of Newberry, a stepbrother, James Peters (Jennifer), of Parker, Colorado, a stepsister, Patricia Alyson Peters, of Seattle, Washington, and two nieces of Parker, Colorado. He was preceded in death by his mother, Susan.

A “Celebration of Life” service for Joshua Ewing will be held on Saturday, March 11, 2017 at 10 a.m. at the Chapel in the Meadows, Forest Meadows Memorial Park, 4100 NW 39th Ave., Gainesville, FL 32606. To leave online condolences, please visit the website at www.forestmeadowsfh.com.

In lieu of flowers, the family asks that you consider leaving donations to the Tri-County Hospice in Chiefland, FL in Josh’s name.