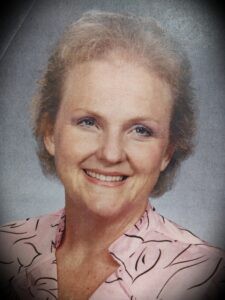 Judith Danford Sweat, (Judith Delaine Danford, Judith Delaine Feagin) or Judy as everyone knew her, 74 of Ft. White, FL, was born in Dothan Alabama on September 18, 1948, and she passed away peacefully on December 17, 2022.

She is also survived by five stepchildren, Dieter Sweat, Peter Sweat, Kathy Sweat-Brooks, Klaus Sweat and John Sweat.  She had many step grandchildren and great grandchildren.

Judy led a very active life, she played basketball, tennis, racquetball, and golf but where she really competed and did well was at bowling.  She had many trophies and awards from her decades of bowling.  In golf she once scored a hole-in-one.  She also enjoyed horseback riding, travelling, camping and fishing.  She also loved to sing and dance, she enjoyed karaoke and learned many dances including clogging in which she loved to show off her skill.  Judy was a very social woman and was loved by many.

Judy was a devoted mother, grandmother and great grandmother.  She was the one person that her family could always count on when they needed anything.  She was always there to offer kind words and she knew how to counsel her family.  She was by her children and grandchildren’s side for every event throughout their lives.

Judy worked at the battery plant in Alachua, FL until she became a mother.  She was a housewife/homemaker until the middle eighties after her first husband’s death.  She then took a job at Skeeter’s restaurant and was part owner in the business.  After Skeeter’s closed, she worked for the Alachua County Jail and finished her career at UFHealth Shands Vista Pavilion.  She retired on her small farm in Ft.  White in 2010 and enjoyed her retirement years gardening, taking care of her animals including horses, goats, chickens, ducks her beloved dogs, cats and exotic birds.

Her last years after her second husband passed away were filled with travelling with her children and grandchildren on various adventures including several camping trips, one was to Ruby Falls in Tennessee.  She also spent time visiting relatives.  Her last grand adventure was a Caribbean Cruise with her daughter, grand daughter and her boyfriend.  Her final hours were spent surrounded by family and friends.