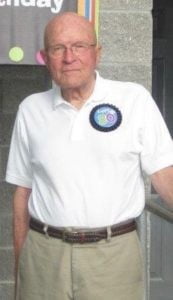 Karl David Kaswinkel, age 88, passed away on April 17, 2020 at Shands Hospital in Gainesville, Florida. He had developed many health issues in recent years and passed away peacefully to be with his Lord. Karl had many roles during his lifetime including husband, father, grandfather, great grandfather, great- great grandfather and bread winner. Everyone that knew Karl saw his confident and caring personality. He was born on April 17, 1932 to John and Vina Kaswinkel in Wilkes-Barre Pennsylvania. He lived there with his parents and his two younger brothers. Karl graduated from Grand Army of the Republic High School and attended Pennsylvania State College. After graduation, he was hired by General Electric Company and was employed by them for 41 years. The last 30 years of this employment he worked at the GE facility in Hague Florida and was the first employee to start work at this location. He was given the responsibility of coordinating the construction of this new battery manufacturing facility. He served in a number of different positions during his career with GE. These included draftsman, manager and facilities engineer. Karl enjoyed quite a few hobbies which included just about anything to do with cars: buying, selling, keeping them in showroom condition, restorations and of course repairing them. During his lifetime he owned over 40 different cars including one he traveled to Germany to purchase. He earned his private flying license and owned his own four passenger airplane. He also enjoyed fishing, boating and camping with his friends and family. After his retirement he joined the Alachua Florida Lions Club. During his membership with the Lions Club he served on their board of directors and received numerous awards. Before Karl and his wife retired, they fell in love with traveling our country in a motorhome. During their retirement they traveled and visited 49 of the states and Canada. Some of their excursions lasted as long as six months. They met many interesting people in their travels and are still friends with most of them today. Karl had a hidden desire that no one knew about it until he retired. This desire was to build a house from the ground up totally without anyone’s help. So he built a modern house and detached garage single handedly. He nailed every nail, painted every wall and laid every shingle, he had no outside help! He did break down a few times and let his wife Shirley help. In recent years he built a canoe from scratch for his sons. He invested 100’s of hours into this project. It was his own design from the beginning. He looked at pictures from some books he purchased to decide on the boat’s design. Since he had never built a boat he designed and built his own templates and tools. Of course the completed project was a work of art and worked perfectly. Karl never did anything halfway, ever. He also adored his wife of 67 years of marriage. Shirley was his “everything”. They met as children and neighbors. Shirley who he called Pearl sometimes was his queen! Their love grew stronger and stronger during the 67 years of marriage and provided a great example for their sons and friends. They truly meant their wedding vows “to death do us part”.  He was an amazing loving father to his two sons. He always found time to spend with them. Fixing bikes, go-karts, motor cycles, cars and helping with school science projects. Most of all he taught his sons on how to be respectable God loving men. Karl was an active member of Christ Community Church in Gainesville Florida and attended faithfully for many years. Karl is survived by his wife Shirley; two sons John Kaswinkel (Patti) of Jacksonville Florida and Matthew Kaswinkel of Dawsonville, Georgia; two brothers Daniel Kaswinkel (Joannie) of Cordova Tennessee and George Kaswinkel (Beverly) of New Philadelphia, Ohio; three grandchildren Mathew Kaswinkel (Christa), Deanna Zrakas (Jay) and Karen Kretzman (Matthew); fourteen great grandchildren, two great-great grandchildren and nieces and nephews. Due to the current pandemic the family will have a memorial service to honor his life at a later time. The date and time of this service will be sent out to friends and family when scheduled. Rather than flowers, please share your kindness by making a memorial gift to the American Heart Association.