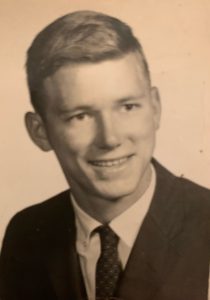 Kenneth Ray Richardson passed away peacefully on February 3, 2022 under the supervision of Haven Hospice in the memory care unit at the Village in Gainesville, Florida. His family was by his side as his dementia condition drew to a close.

When Ken was in second grade, the family moved to Salisbury, North Carolina, and joined First Methodist Church. He graduated from Frank B. John School and Salisbury High School (f/k/a Boyden HS) where he met his future bride, Libby. After finishing high school in 1958, Ken attended North Carolina State University and graduated with an engineering degree in 1963.
On August 12, 1962, he married Elizabeth “Libby” Sherrill daughter of William “Bill” Sherrill and Edith Krider Sherrill at First Presbyterian Church in Salisbury. In 1963, Ken was accepted in the General Electric manufacturing management program. As part of this program, Ken worked at three different GE plants in three different cities: Syracuse, NY, Cincinnati, OH, and Gainesville. Each city was a place of birth for one of his three children. He was proud they were five-state family, each born on a different one. They arrived in Gainesville, Florida in December 1965.

His work focused on the development and manufacturing of rechargeable batteries for aircraft, satellites, and NASA exploratory space craft. One work highlight was taking the family to Cape Canaveral for the Viking launch to Mars which his GE team had worked on. The team members’ names were included on the batteries; Ken’s signature resides on Mars. After GE sold the facility to Gates Energy, he served as the Manager of Manufacturing of the Aerospace Battery Division. For his efforts
with nickel hydrogen cell design, he was awarded three patents as a co-inventor and one, individually. When the business was sold and moved to France, Ken sought a second degree in computer science from the University of North Florida. After graduation, he was employed by MSA company based in Sparks, Maryland, where he continued his work in aerospace battery research until his retirement in 2004.

The couple joined Grace Presbyterian Church in Gainesville where Ken served as Deacon and then Elder. One of his last contributions to the church was having the sanctuary wired for new hearing devices. Ken was very athletic. He was an avid golfer, runner, softball pitcher and tennis player. Ken and GE co-worker/friend Gene Harris won many GE Golf trophies and attended many UF basketball and football games together with their wives. He also enjoyed camping, canoeing, fishing, and watching any sporting event on TV. Many family vacations were taken in the Airstream trailer. The family traveled to all the
Southern States and went out West as far as San Francisco, California. But his favorite vacation spot was Crescent Beach. He spent many hours with his children and grandchildren playing, swimming, fishing and running around.

He was dependable, each of the family could rely on him through good times and bad with his good wit and full heart of love and practical advice. Ken could fix anything. He kept his 1968 Yellow MGB Convertible in good working order. It is still driven today even though Ken could not work on it in his final years. We appreciate all the prayers and support through his two difficult illnesses of total deafness and dizziness from Ménière’s disease and the 6 years of dementia. The family is grateful for UF audiology team help with cochlear implants which he used to the end. And they are thankful for the extraordinary care and comfort of Haven Hospice nurses and staff as well as the nurses and staff at the Laurel Square Memory Care Unit at the Village of Gainesville, Florida.