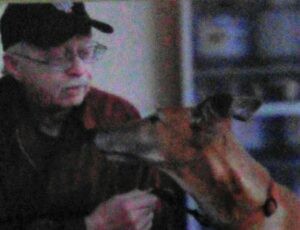 Larry L. Miller, 80, of Gainesville, FL, Passed away on October 4, 2022 at 7:30AM. He moved to Gainesville from Springfield, Ohio in 2002 and previously resided in Salem, Illinois for twelve years.

Mr. Miller was a retired Private Security Officer, having worked in that profession for over 14 years before retiring in 2005. He formerly was a reporter/photographer for the Salem (IL) Times commoner newspaper. He also worked as a projectionist and manager for theaters in the San Diego, California and Killeen and Temple, Texas area for a number of years. He was a relief manager for theaters in Salem and Centralia, Illinois before moving to Springfield, Ohio in 1999.

Mr. Miller was a 1963 graduate of Killeen, Texas High School, and was a U.S. Army veteran, serving in Seoul, South Korea from 1965 until his discharge in 1966. He served briefly with the Civil Air Patrol in San Diego, California, and attained the rank of Warrant Officer in the field of Public Information. He also was a former volunteer fireman in both Nolanville and Killeen, Texas.

Mr. Miller was a member of Shift Church in Gainesville. He served as a Volunteer Ambassador at the Malcom Randall Veterans Administration Hospital in Gainesville for several years. He enjoyed writing, photography, and writing gospel song lyrics. He was born in Waverly, Ohio, the son of Robert L. and Arie I. (“Granny”) Miller. He was raised by his grandparents, George and Dorothea Miller, also of Waverly. He is survived by: special friends, Sharon James of Gainesville and Richard and Michele Othus of Alachua, Florida; his cousin, Ann Satava of Burton, Ohio; 2 sisters, Kathy Lynn Waddell and husband, Floyd, of Buckholts, Texas, and Nancy McCraney and husband J.D. of Raeford, North Carolina. He also survived by a niece, Kimberly Hardcastle and husband Terry and Children, all of Texas; a nephew, Dewayne Barbee and his wife, Jeannine, and daughters of Palm Bay, Florida, and other nieces, nephews, and cousins.

A Memorial Service will be held on Saturday, October 15th, 2022 at Shift Church of Gainesville, at 11:00AM. Following local services, his ashes and urn will be buried at a private location near Alachua, Florida. Local arrangements are under the direction of Forest meadows Funeral Home in Gainesville, FL.

In lieu of flowers, donations are requested to be made in Mr. Miller’s Memory to Shift Church in Gainesville.