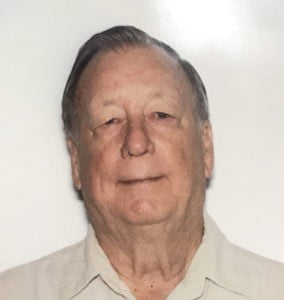 Laurence Edward LaBelle died Sunday, December 31, at Haven Hospice Care Center, after a long battle with pulmonary fibrosis. Larry was born in Oak Park, Illinois, on July 4, 1931, to Leo Arthur and Katherine Fitzgerald LaBelle. In 1938, he moved with his family to Hollywood, Florida, where he grew up. In 1948 he graduated from St. Leo College Prep, after which he attended Georgia Tech and served in the U.S. Army. After graduating from the University of Florida, he taught Industrial Arts and Mathematics in Broward County Junior and Senior High Schools. In 2005, he moved to Gainesville, where he has since been a member of Holy Faith Catholic Church.

Larry was an avid shooter who enjoyed trap, skeet, and range shooting. He attended gunsmithing school in Colorado and traveled throughout the United States participating in skeet and trap shooting tournaments. He promoted the sport in a safe and professional way with friends and family.

Larry was always a loving and devoted son, husband, father, brother, grandfather, and great grandfather. He is survived by his beloved wife Irene; two sons, Jeffery, of Hollywood, Florida, and Michael (Marie), of San Antonio, Texas; two grandsons, James (Cheri), of San Antonio, and Joseph, of Peyton, Colorado; two great-grandsons, Landon and Dylan; one sister Jeanne Weyant, of Kernersville, North Carolina; and two nephews, Kenny Weyant and Scott Weyant, all of whom will miss him deeply and with much love.