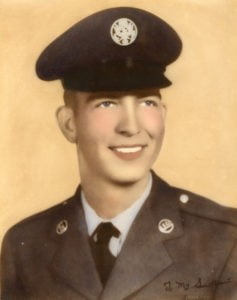 Lewis E Myers of Gainesville, Florida passed away on April 4, 2018, after a brief illness. Born on March 29, 1935, he grew up and attended high school in Hahira, Georgia. In 1957, Lewis enlisted in the US Air Force and was stationed at Patrick AFB in Florida, where he met and married his sweetheart, Betsy Lou Bonesio, whom he affectionately called “His Honey”. His subsequent Air Force assignments were at Presque Isle AFB, in Maine, and at Vandenberg AFB, in California. While in the Air Force, Lewis worked as an electrician on the Shark and Titan Missile Projects before retiring from military service in 1965. Post military, he moved his growing family to Gainesville, Florida, where he operated a Sunoco and then a Chevron gas station for 3 years. In 1968, he began a 24 year career with the Eli Witt Company. In 1992, he joined the Hav-A-Tampa/Phillies Cigars company, where he worked for nearly 19 years before retiring in 2011 at age 76. Before retiring, in 2005, Lewis and Betsy took a memorable vacation trip to Alaska, with daughter and son-in-law, Kari and Scott Cameron. This never to be forgotten trip is remembered fondly, as they lost their beloved daughter Kari, to cancer, some two years later. In retirement, Lewis and Betsy enjoyed quality time together and had great fun socializing with friends, traveling, and playing cards. In 2015, their children and grandchildren planned a surprise 80th birthday party for Lewis, which was well attended by family and friends. Lewis was preceded in death by his parents Ramer and Carrie Myers, his sister Mattie Myers Moree, and daughter Kari Myers Cameron. He is survived by his wife of 60 years, Betsy Lou Myers, Daughter Grace Myers Chesser (Bobby), son Douglas Myers (Pam), son-in-law Scott Cameron, 10 grandchildren, and 7 great grandchildren. In lieu of flowers, memorial donations may be made to the following: Florida Sherriffs Youth Ranches Inc P.O. Box 2000 Boys Ranch, FL 32064-9984 Northwest Baptist Church 5514 NW 23rd Avenue Gainesville, FL 32606.