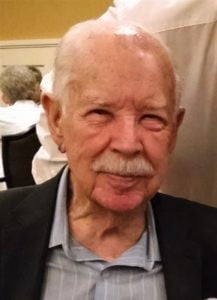 Lt. Col. Robert (Bob) Johnson (Retired), 92, of Gainesville, Fla., went to be with his Lord on January 19, 2017. He is survived by his three sons: Bill (Pam), Tom (Sandy), and Mark (Jackie); five grandchildren: Heather (Brian), Brent (Teresa), Morgan, Timothy and Caris; three great-grandsons: Brayden, Quade, and Tuck; Brother Dave (Norma), and many nieces and nephews. He joins his wife Mona (who passed away in November, 2011) in heaven.

Bob was born and raised in Pipestone, Minnesota. He was admitted to West Point in 1945, graduating with the Class of ’49. He served in the military honorably and faithfully for more than 20 years. Known as a gregarious and outgoing man, Bob could befriend anyone on the spot. Whether at a barbecue with family members or talking his way out of a speeding ticket, Bob was blessed with the ‘gift of gab.’

Although he missed Mona very much, Bob greatly enjoyed the last few years of his life. He made many friends at his home in The Village, especially in the morning ‘coffee club’ at the Cypress building. He also looked forward to his annual visits to see his son Bill and his family in Minnesota, and Tom and his family in Kansas. His son Mark and daughter-in-law Jackie surprised him with a trip ‘back in time,’ arranging for him to spend his 90th birthday in his hometown with his entire family.

He spent his last year on earth crossing several items off his ‘bucket list,’ which included traveling to Washington, D.C. with his sons over Father’s Day weekend and seeing his beloved Chicago Cubs win the World Series. He will be missed by everyone who knew him.

His funeral will be held at Abiding Savior Lutheran Church, 9700 West Newberry Road
Gainesville, Florida, 32606, on Saturday, January 21, 2017 at 3:00 p.m. A viewing for family members will take place at from 1:30 to 2:00 p.m. and a viewing for the public from 2:00 to 3:00 p.m. A reception with light appetizers and refreshments will immediately follow the funeral for guests who wish to visit with Bob’s friends and family members. In lieu of flowers, donations may be made to Abiding Savior Lutheran Church at the above address.

Internment will be at Jacksonville National Cemetery on Monday, January 23, 2017.