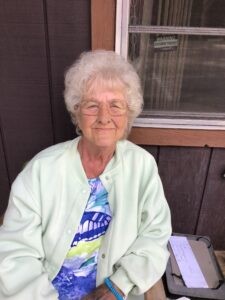 Mary Alice Sheridan Gayton began her journey on earth October 1, 1945, in Fulton, NY and her journey ended April 2, 2022, in Gainesville, FL. She married the love of her life, Kenneth (Kenny) Sheridan Jr., on her 18th birthday. The Air Force took Mary and Kenny to North Dakota shortly after they were married, where they lived for three years before returning to New York. Mary was a loving and caring mother to her five children and enjoyed her time as a homemaker. Mary and Kenny moved to Florida in 1977 and spent time in Gainesville and Clearwater until Kenny passed away in 2000. Mary was an avid lover of squirrels and skunks, having a de-scented skunk as a household pet while the children were growing up.

She remarried in 2001 to Fred Gayton and their time was split between Texas and Florida before he passed away in 2008. Mary filled her time playing bingo, being a grandmother, cruising the Caribbean, she loved to sit outside, feeding and befriending the squirrels, even naming a 3-legged squirrel “Stumpy.

A memorial service will be held on April 13 th at 2:00 pm at Forest Meadows Funeral Home, 725 NW 23rd
Ave, Gainesville, FL 32609. In lieu of flowers the family requests donations made to Haven Hospice.