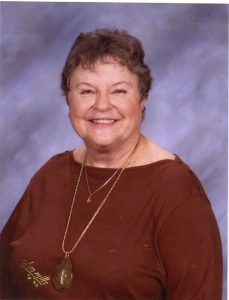 Mary Jackson Kampe, age 87, died peacefully November 11, 2021 at Shand’s Hospital surrounded by her loving family.  We are consoled knowing that she has been reunited with her loving husband, Otto, who has been deceased since 2005.

Mary was born January 27th, 1934 in Roanoke, Alabama to Charles Homer Jackson and Dura Ophelia Bailey Jackson. She was the 7th of 10 children. She went to school at Lowell in Roanoke for six years, studied at Rock Stand School for four years, and studied two years at Handley High School where she played basketball.  Mary loved sports.  She went on to play softball, tennis, golf, and bowling, and when her body didn’t permit sports she became an avid bridge player and enjoyed bingo.  Her many trophies are a testament to her competitive drive.

She married Clint Hayes her senior year in high school.  They had two children, Ed and Debi.  The marriage did not last, and Mary was a single mom for eight years, working as a secretary at the Marine Corps Supply Center in Albany, Georgia.  In 1965, she married the love of her life, Otto Kampe, a pilot in the Air Force stationed at Albany.  They were reassigned to Tinker AFB, Oklahoma where their daughter, Kelly, was born.  Their next assignment was Travis AFB, California. While her beloved went to Vietnam for a year, Mary took care of the three children.  They lived their “Twilight Tour” (5 yrs) in Charleston AFB, South Carolina. In 1974, they moved to Gainesville, Florida.  Otto got his MBA at UF and opened his own appraisal business.  While Mary worked for the Soil Conservation Service, she attended night school at Santa Fe Community College to earn her AA.  She finished her Civil service career with the U.S. Department of Agriculture in 1989.

In the 90’s, after Otto was diagnosed with CLL, they started their “Bucket List.”  They bought a 30-foot Airstream MotorHome and traveled!  They took several trips to Canada and visited many, many National Parks.  They caravanned to Alaska for 30 days, went to Hudson Bay to see the Polar Bears, and took caravan trips to Mexico and Belize.  Their last trip was to the Kentucky Derby in 2004.  Otto died November 2005.  They both boasted that it was the best 10 years of their lives.

Mary was an amazing woman!  She was a tremendous homemaker, wife, mother, grandma and great grandma, and friend to many. Her memory will live on in the hearts of her children, Edward Allen Hayes (Ed) of Melbourne, Florida, Deborah Diane Kunkel (Debi) of Gainesville, Florida, and Kelly Kampe McCoy of Maui, Hawaii, eight grandchildren: Carrie Hill, Shawn Whaley, Lianne March, Bryan Whaley, Jessica Steen, Sofia Marlin, Shaman Marlin, and Hyla Marlin and 14 great grandchildren. She leaves behind a host of family and friends to cherish her memories. We love you, but God loves you more.  You’ll be dearly missed.