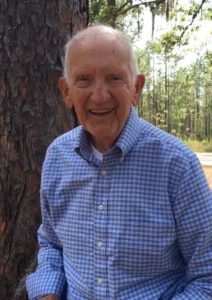 Gene graduated from Orlando High School in 1946 and the University of Florida with a Bachelors of Science in Forestry in 1952. He was proud to be a UF alumnus and was a lifelong Gator sports fan. He was a WWII Navy Veteran and served as a medic on the destroyer, USS Noa DD-841.

Gene served as Director of Buildings and Grounds for the City of Gainesville for 25 years.

He was a very active community leader. He served in the Jaycees, Elks Lodge, the Altrusa House, and served for over 50 years with the Easter Seals. He was instrumental in developing Camp Challenge, a camp designed for people with disabilities and special needs. He was honored for his legacy and commitment to Easter Seals with a path named “The Gene Liddon Trail” at Camp Challenge. Gene was on the City of Gainesville Beautification Board which has long been recognized as a “Tree City USA” by the Arbor Day Foundation. Gene is responsible for many of the city’s majestic live oak trees and local parks.

In retirement, he opened Shiloh Oaks Nursery in Micanopy, Florida. He specialized in growing and planting live oak trees in the local area. Gene and Audrey have hosted an annual family reunion at Shiloh for 50 years.

Gene was also an ace checkers player and was the “Checkers King” at Hunter’s Crossing Place. He especially loved playing with his grandkids, except when they won!

He was known as a family man first and for his willingness to help others in their time of need. He was a loving husband, devoted Dad, Grandpa, and Great-Grandpa. He attended almost all birthdays, graduations, weddings, sports events, and recitals that any family member was a part of. He has 17 grandchildren: Greg (Kim), Audrey (Trevis), Angie, Matthew (Miriam), Tara (Nate), Scott (Lauren), Kaitlyn, Ashley, Jonathan, Kelly (Dwayne), Julie (Darren), Kent (Heather), Nathan (Jackie), Allison, Amy Michelle, Kyle, and Hannah. He has 14 great-grandchildren: Amber, Derrick, Drew, Nick, Waylon, Logan, Preston, Paityn Jane, Dawson, Ronan, Lacie, Weston, Emory, Miles, and two on the way! He also has one great-great grandchild, Xavier.

Gene is also survived by many beloved nieces, nephews, cousins, and friends.

In lieu of flowers, please send donations in memory of Gene to Camp Challenge at 31600 Camp Challenge Road, Sorrento, FL 32776 or donate via their website at EasterSeals.com/Florida

There will be a private family burial due to the pandemic. A memorial service will be held at a later date.