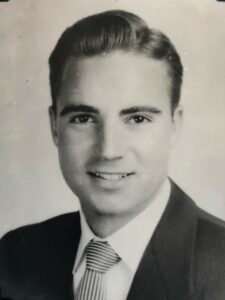 George “Alan” Hardin, a 60-year resident of Gainesville Florida, passed away peacefully on Tuesday June 21, 2022, of natural causes at the age of 91. He was married to Betty Lois Dees for 51 years until her passing in May 2005.

Alan was born in Johnson City Tennessee on September 19, 1930, to the parents of Edna and George Hardin. He attended Science Hill High School where he was voted “Best Looking” his senior year. Alan received a Bachelor of Science degree in Civil Engineering from the University of Tennessee and afterwards became a First Lieutenant in the US Air Force stationed at Burtonwood Air Force Base in Warrington, England. Following the service, he became the City Engineer of Johnson City and then moved his family to Gainesville, Florida in 1962 to eventually become the Director of Public Works. He ended his working career as the Assistant Public Works Director for Alachua County. He was a registered Professional Engineer in the states of Florida and Tennessee.

For many years they attended the First Baptist Church of Gainesville. One thing they valued highly was education and that their children achieve high goals in life. Alan and Betty were avid tennis players and golfers. He enjoyed running, traveling, camping, and especially being with his children. For many years he was a member of the 300 Club and the University of Florida Golf Club. He and Betty played bridge, but his real gaming passion was backgammon. They instilled a highly competitive nature in their children. Alan developed an interest in genealogy and was instrumental in developing an extensive family tree. Alan was instrumental in assembling his family every other year at Thanksgiving for family reunions. He was a great role model, and his family will cherish the memories and accomplishments that were shared with him.