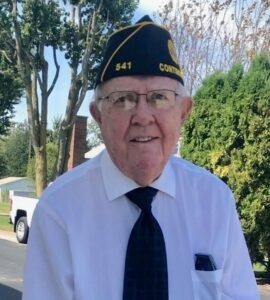 Richard Harris was born on February 3rd 1925, at Oakwood, Ohio. He was 97 when he died peacefully at Haven Hospice, Gainesville, Florida on Thursday the 29th of June 2022.

Mr. Harris earned degrees from Ohio State University, the University of Toledo and Bowling Green State University. He served as principal and teacher at Convoy Union in Van Wert County, Ohio and Waterville of the Anthony Wayne school district in Ohio. He was superintendent of schools in North Baltimore, Ohio for nine years. He then moved to Archbold, Ohio where he served as superintendent of schools for 15 years before retiring to Gainesville, Florida.

Mr. Harris was a veteran of WWII. He joined the Marines in 1943 and saw combat action in the Pacific theater.

He held memberships in various organizations including the American Legion, VFW, Rotary, Phi Delta Kappa, NEA&OEA and AASA. He was a life member of the Retired Teachers Association. Mr. Harris was a Member of Trinity United Methodist Church and the Sojouners Sunday School class in Gainesville Florida. He served on many church boards and was active in the men’s group.

Brothers and sisters include Shirley(Art)Hoellrich,Ayersville,Ohio,Helen(Jr)Williams,Oakwood,Ohio and Walter(Eileen)Harris, Van Wert. Ohio, all deceased. In 1946 he married Delores Enderle who died on February 23rd,2004. They had three children, Cynthia(David)Thompson, Gainesville, Florida, Richard Lyle Harris, Gainesville, Florida and CeAnn Harris, Alachua, Florida. He has three grandchildren and nine great grandchildren. It was his wish that no services of any kind be observed.