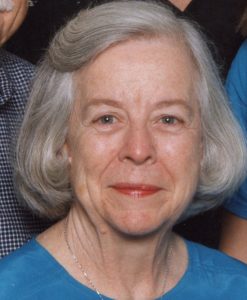 Mrs. Faye Norris Jackson, aged 87, a loving mother, grandmother and great grandmother was called home to rest with her Lord and Savior on July 29th. Her passing came after a long journey with Alzheimer’s Disease. She is preceded in death by her husband, Leonard D. Jackson who passed away in 2009. They were married for 52 years. She leaves behind three daughters, Elizabeth Stark (Steven), Stephanie Nowell, Jennifer Kane (Rick), four grandchildren, Jamie Mosley (Garrett), Hannah Stark, Addyson Kane, Jackson Kane and two great grandchildren, Scarlett and Jackson Mosley. She will be greatly missed by all. Faye was born in Warrenton, Georgia on December 12, 1932 to parents Clara and Homer Norris. She had seven siblings Jack, Catherine, Bennett, Joan, Linda , Luther Allen (LA) and Harry. She left her home in Union Point to go to nursing school and practiced nursing until her third child was born. Her first nursing position was in Savannah, Georgia which is where she met Leonard. They married in Savannah which is where all three of their children were born. They lived there until moving to Athens, GA where Leonard completed his doctorate at the University of Georgia. After he graduated, they settled in Gainesville, Florida where she lived until she passed. She was an active member of the Micanopy Homemakers club and loved to play bridge with her bridge club, was an avid reader, and making crafts for others. She received her real estate license and worked as a realtor for a short time. She was a long time member of Trinity United Methodist Church. Faye’s greatest joys were being a mother, grandmother and great grand mother. She was the consummate caretaker and her face lit up anytime she heard the name “Granny” being called. All who knew her loved her and appreciated her kind “southern” ways – especially her cooking! She had the most elegant southern draw which always put people at ease. Her final years were spent at the Windsor of Gainesville where she received outstanding care. This truly became her home and “Miss Faye” was the life of the party and she was loved by so many people. She could usually be found singing or dancing with the staff or friends. She made such great friends and the family is very appreciative of the staff for loving her and caring for her the way they did. A special thanks has to be given to her long time caregiver, Brenda Cox, who is considered a part of the family. Brenda helped care for Faye for over eight years and they were the best of friends. The family is so very thankful for her.  Arrangements are being made by the Forest Meadows Funeral Home. Due to COVID-19 we will need to limit the guests to the immediate family. In lieu of flowers, donations may be made to the Gainesville Alzheimer’s Association or Haven Hospice.