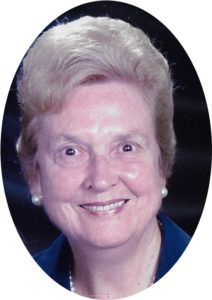 Myrtice Viola Rhodes Waldo-Eckert-Wheeler died peacefully at her home in Tequesta, Florida on December 27, 2017 at the age of 92.

She is survived by her husband, Donald Wheeler and her children, daughter, Sheri Andino (Greg Straka) of Dade City, Florida; son, Whit Waldo (Cathy) of Austin, Texas; daughter, Vicki Tougaw (Terry) of Salem, South Carolina; son, Stuart Waldo (Kerri) of Prattville, Alabama, and her 10 grandchildren and 2 great-grandchildren. She is preceded in death by her daughter, Julie Waldo of Gainesville, Florida.

Myrtice was born on March 7, 1925 in Abbeville, Georgia to George and Essie Rhodes who were founding members of Lebanon Baptist Church in Abbeville. She studied English at Middle Georgia College and Auburn University (AL) and in 1968 graduated with a Juris Doctorate in law from the University of Alabama School of Law.

Her children remember her as a devoted Christian with a never ending love of both family and education. She encouraged her family to follow the teachings of Jesus, to pursue education, and to share her own love of golf.

Myrtice was an accomplished attorney who supported her family for many years while working for Florida Farm Bureau and in her own private practice also serving on the board founding The Villages of Gainesville (FL) Retirement Community. At the time of her passing, she was a dedicated worshiper at Tequesta First Baptist Church.

The funeral is scheduled for Saturday, January 6, 2018 at 1:30 p.m. at Forest Meadows Central Cemetery, Chapel in the Meadows, in Gainesville, Florida. In lieu of flowers, please send donations to Lebanon Baptist Church (2271 Lebanon Road Abbeville, GA 31001) or Lewy Body Dementia Association (https://www.lbda.org/) or the Julie Waldo Memorial Endowment at the University of Florida (https://www.uff.ufl.edu/give-now/).

The family would like to thank Assisting Hands of Palm Beach and Treasure Coast Hospice for their efforts, care, and dedication.