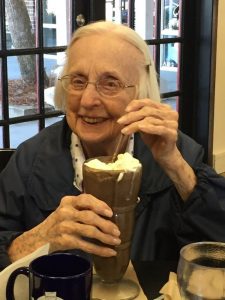 Nancy Alice Oliver McBride placed the final piece of her life quilt in place on Wednesday, May 12, 2021.

Nancy loved to sing and dance. She could always carry a tune and recall lyrics.  As teenagers, she and her brother would often go out dancing and win dance contests.  In those years, she worked as a secretary for the Cotton Exchange and sang on the radio – amazed that she was actually paid to sing!

On the luckiest day of her life, she met Pleasant Henderson McBride (Pat), who was a DJ on the radio. At first, she liked him because he had free passes to all the Memphis dances.  That soon changed and she told him if he went to college, she would marry him.  And he did both.

They moved to Miami, FL, where Pat attended to the University of Miami and they had their first child, Mary Alice – during a hurricane. After graduation, Pat was hired by General Electric (GE) in Schenectady, NY, and then was moved to San Jose, CA, were they had their second child, William Patrick (Billy) – during an earthquake. Later, Pat was transferred back to Schenectady, NY, where their third child, Michael Carl, was born – during an ice storm.  Apparently, the family thrived on natural disasters.

In 1965, GE moved them to Bethesda, MD, where Pat worked in that strange new business of computers. They loved living just outside of Washington, DC, and enjoyed many years entertaining family and friends.  As a family, they enjoyed playing games together. Charades, Mahjongg, Scrabble, and Michigan Rummy were just a few of the ones Nancy enjoyed… winning.

Nancy was a registered girl scout leader for over 25 years. She attended the prestigious Macy Training Center for the Girl Scouts and became a trainer of adult volunteers. With two boys, she and Pat both volunteered with the Boy Scouts. Nancy became a registered scouter in 1963. She first served as a den mother and volunteered all the way up to working at four presidential inaugural parades. She was one the first women in the National Capital Area Council to complete the Boy Scout Leader’s Wood Badge Training and then earn the prestigious Silver Beaver award.

Children and babies always gravitated to Nancy and she could be counted on to soothe any crying child. For many years Nancy taught preschool at Chevy Chase Presbyterian Church, where she loved each day of her job.

While she had always sewed, in Bethesda she fell in love with quilting. There she joined the Bethesda Quilters Association, a group she helped to flourish and eventually became its President. One of her highlights was quilting in the foyer of Kennedy Center for the play, “The Quilters”. She also served as a docent at the Daughters of American Revolution’s Museum, guiding guests through the extensive quilt collection there. Nancy became an expert on the famous Baltimore Quilts and presented programs on them to audiences at Elderhostels and regional quilt groups.

Shortly after their fiftieth anniversary, Pat passed away in 1999. Nancy stayed in Gainesville several more years. In 2016, she moved to Tallahassee to be near Michael and his family.

The family is indebted to caregiver, Natalie Bell, who helped make Nancy’s months during COVID-19 so much richer.

Nancy was laid to rest next to her beloved Pat in Gainesville, FL.

It is said within every quilter there is a masterpiece. For those that knew her, Nancy was the masterpiece.

Friends and family wishing to honor Nancy are invited to mend something that is torn, make your next purchase good quality fabric, and cover a sleeping loved one with a handmade quilt.