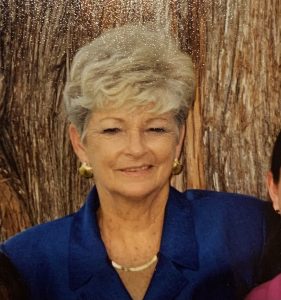 She graduated from the University of Florida where she retired in 1988 as a computer systems analyst. Nell was an avid reader and loved to read her Bible, plus she enjoyed reading about the Amish culture and customs.

Before her husband Don’s death in 2007, they motor-homed to every state in the United States and a lot of them numerous times. They fished in most of the states. Spending six months in Alaska, they enjoyed this state the most.

She entertained her grandchildren, telling them wild but true tales of their travels. No one enjoyed their grandchildren any more than she did. One favorite memory was to take her granddaughters shopping without their mother present. They would bring her dresses too small and certainly not her style to try on for them. They would laugh so much that the sales lady would come back to the dressing room to check out the noise. Nell is a member of North Gainesville Baptist Church.

She is preceded in death by her husband, Don Epperson in 2007 and her son Robert Epperson. She is survived by their three children, Teresa Ross (Tracy), Tom Epperson (Alisa), Don Jr (Thelma), Rob’s wife (Karyn), six grandchildren and five great grandchildren.

The funeral will be at the Countryside Baptist Church 10926 NW 39th Avenue Gainesville at 10:00 AM Saturday, March 27th, with Pastor Gene Keith presiding. Her burial will be at Countryside Cemetery.

In lieu of flowers, contributions can be made to North Gainesville Baptist or Countryside Baptist Church.