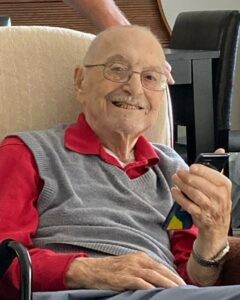 Upon graduation, Norm enlisted in the U.S. Navy. After training at Great Lakes in Chicago and communications school in San Diego, he was assigned duty aboard the USS Wisconsin and the USS New Jersey battleships during the Korean War. Stationed in Hawaii in the early 50’s, he met Della Dean, a fellow sailor. They married on May 31, 1952 and celebrated 65 years of love until her passing in 2017. They enjoyed a wonderful military career and family life while stationed in Washington D.C., Maryland, Okinawa, Japan, Virginia, Scotland, and Puerto Rico with their five children. The family settled in New Hampshire for a time while Norm served aboard the USS Jamestown during the Vietnam War.

Norm retired in 1980 after 30 years in the Navy and he and Della were excited to start a new phase of life in the warmth of Florida. Norm enrolled at the University of Florida and became a Gator graduating in 1985 with his Bachelor’s degree in business management. Attending sporting events at UF became a loved activity. Gymnastics, volleyball, but especially baseball, were the favorites. Together, they were baseball season ticket holders for many years until Della’s health began to fail. Over the last several years he attended games (up through the 2022 season) with his son Bill.
He and Della enjoyed traveling in their retirement. Exploring the history and beauty of Florida and sharing it with the many friends and family members who visited over the years brought them happiness. They reunited with family in New Hampshire and Michigan most summers. In the late 90s, a cross country trip was made to achieve their goal of traveling to all 50 states. Travels continued with cruises through Europe and South America.

Norm was a wonderful husband, father, and grandfather. He was loved and admired for his strength and knowledge and he will be greatly missed. Norm was predeceased by his parents, brothers, wife, daughter (at birth), daughter (Macy), and granddaughter (Heather). He is survived by his children of whom he was so proud: Norman (Susan) Poulin of Cleveland, GA, Tom (Linda) Poulin of Chesapeake, VA, Lori Jackson of Satellite Beach, FL, Bill (Carol) Poulin of Orlando, FL and Son-in law Ric Monaghan of Gainesville, FL. He also leaves 10 grandchildren and 7 great-grandchildren who brought him joy and several beloved nieces.

Services will be held at Arlington National Cemetery at a later date.