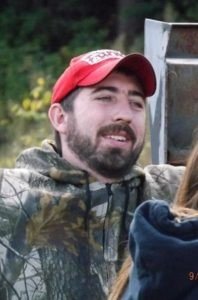 On March 10, 2020, we lost Patrick Michael O’Connor due to a senseless act of violence just four days shy of his 38th birthday. Patrick was born in Buffalo, New York on March 14, 1982 to Brian O’Connor and Elaine McIntyre. He leaves behind his wife and the love of his life Christina (Chrissy) O’Connor and their three beautiful daughters, Ainsleigh (age 10), Ashlyn (age 6) and Addison (age 3). Patrick also leaves behind his parents, step-parents, siblings, much family and many, many friends because of his philosophy that “there’s no such thing as a stranger, only people we haven’t met yet.” Patrick spent his early childhood growing up on a dairy farm in Machias, New York with his three brothers and one sister. He also spent much time traveling the world, for the military but also for work and pleasure. Due to his competitive nature, Patrick excelled at sports. In his youth he played baseball and football and in his high school years was on the swim team and played varsity football for Ten Broeck Academy in Franklinville, New York. Immediately following his high school graduation, Patrick joined the United States Air Force, spending a great deal of time overseas. Some of this time was spent in Germany during the initial response of Operation Enduring Freedom (A-10 Fighter Squadron) and later in Korea (U-2 Spy Planes). During his years in the military he earned many medals, ribbons, awards and commendations. After his honorable discharge from the Air Force in 2006, Patrick integrated his love for people, farming and mechanics into his calling in life, Agricultural Sales. This calling eventually led him to Land Pro (John Deere Dealership) and then on to Pottinger US, Inc., an agricultural equipment manufacturer, where he was the Southeast Regional Sales Manager. This work brought Patrick and his family to reside in the Panhandle of Florida. There will be a Celebration of Life Ceremony in Franklinville, New York. For more information on the details of this service, please contact one of his family members or friends.