Paul Duffey passed away on Friday, April 28, 2017. He was born on June 28, 1941 in St. Petersburg, FL to the late Dorothy and Mac Duffey. He had 6 siblings. Paul graduated from Largo High School and began working at 16 years old as the clean-up boy in the meat department of a local Publix food store. He spent his entire work career with Publix and through several promotions retired in 1996, after 38 years of service, as a Meat Merchandiser of the northern Florida district for Publix.

Paul was raised in the old Methodist faith and throughout his life remained a man of deep faith which frequently translated into multiple volunteering activities and an extraordinary compassion for the less fortunate. He was also especially devoted to military support organizations. Paul loved helping others and never met anyone he did not consider a friend. The love for others was often shared by hosting large cookouts at his home for his family and friends. He enjoyed golfing, traveling, visiting casinos, and especially fishing. However, his most joyful moments were the time he spent with his wife, Grace, and with family and friends.

Before moving to The Villages in 2012, he lived for several years in Gainesville, FL. He is survived by his wife, Grace, also a Publix coworker whom he met in 1983 in Jacksonville, FL. Paul is survived by his daughter, Tracy, of The Villages, and his son, Richard, of Gainesville, as well as by his grandchildren, Ashley, Tiffany, and Aviah, and great-grandchildren, Ethan and Annabelle. He was predeceased by his daughter, Kelly.

In Paul’s memory, the family request that contributions of his favorite food, JIF peanut butter, be made at his service. All contributions will be donated to the local food bank.

A visitation will be held on Friday, May 5, 2017 at 12pm at Chapel in the Meadows, 4100 NW 39TH Ave. Gainesville, FL. The funeral service will begin at 1pm with the interment immediately to follow.

Arrangements are under the care of Forest Meadows Funeral Home 352-378-2528. Online condolences can be made at www.forestmeadowsfh.com. 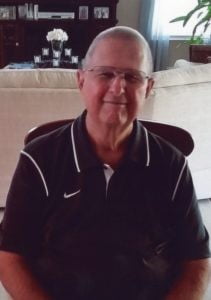