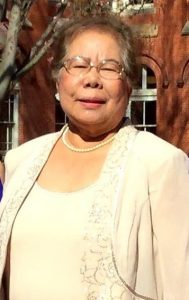 Purita Molina Dayawon, 82, of Gainesville, FL, passed away on November 12, 2020. She was a woman of deep faith and many talents, from gardening and singing, to cooking delicious Filipino dishes for her countless friends and extended family to enjoy.

Purita was born in Paranaque City, Philippines, to Apolinar and Aurelia Dayawon on April 28, 1938. She earned a B.S. in Nursing from the University of the Philippines, and an M.S. in Early Childhood Education at Jersey City State College. She worked as a Registered Nurse and educator for 40 years, and somehow found time to raise four precocious boys and attend all of their athletic activities, theatrical performances and band outings.

She volunteered with numerous organizations over the years, including Operation Brotherhood International in Laos – and at a time when most friends her age were retiring, she instead joined the U.S. Peace Corps in Nepal. After returning to the U.S., she served as a foster parent, providing loving homes to multiple children with medical needs, one of whom she adopted.

Her hands were rarely still. If she wasn’t tending her garden, singing with her church choir, or helping to organize community and church events, she was hosting and feeding a house often packed with friends and family. She enjoyed teaching even the clumsiest people how to roll the perfect lumpia, and cheering on her beloved Florida Gators. And more than anything, she loved spending time with her children and grandchildren.

Purita is preceded in death by her parents, Apolinar and Aurelia Dayawon, brothers Jaime and Manuel Dayawon, and sisters Divina and Teresa Dayawon. She is survived by her sons: David Hornilla and wife Maricon of Gainesville, FL; Victor Hornilla and wife Gigi of Rota, Spain; J. Robert Hornilla and wife Kate of Atlanta, GA; and Conrad Dayawon-Bobbitt of Gainesville, FL. She is also survived by many siblings, including her brothers Miguel Dayawon and wife Dulce of Des Peres, MO; Apolinar Dayawon of Jersey City, NJ; Raymundo Dayawon and wife Lydia of Hazlet, NJ; Nicolas Dayawon and wife Karen of East Stroudsburg, PA; sisters Zenaida Ulep of the Philippines, and Cristina McHugh and husband James of Kintnersville, PA; grandchildren Joshua, Ayanna, Ysabel, and Veronica, and many nieces and nephews.

In lieu of flowers, memorial donations may be made to St. Patrick Catholic Church, 500 NE 16th Ave, Gainesville, FL 32601.