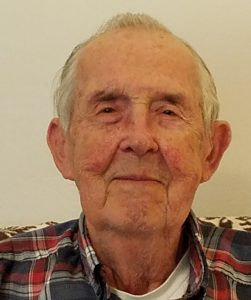 On July 15, 2021, in Gainesville, Florida, Ralph Olson Youngstrom heard the words, “Well done, My good and faithful servant.”  He was a fine Christian man who loved his Lord and was a role model husband, father, grandfather, and friend to many.  He was genuinely concerned about people and shared his faith with everyone.  He was known for striking up conversations with strangers and leaving them feeling better.  He volunteered his electrical skills to his church, mission/service short-term trips, and to the homebound and elderly. He was born on January 25, 1930, in Phenix City, Alabama, to the late John Carl and Eula Youngstrom.  He attended Central High School, where his 6’5” height made him a prized basketball player and earned him the nickname “Slim.”  Upon graduation in 1948, he joined the Navy.  He completed electrical school while in the Navy and was assigned to the USS Dixie when it was involved in the “48-Hour Bombardment” of North Korea in 1951. He loved to swing dance, and when on leave, he always went to the Arthur Murray Studio and the USO.  Upon his return to Phenix City, he met the love of his life, Francine Martin.  They were married in 1953 and were happily married for 60 years until her death in 2014.  He was employed by Western Electric Company (later AT&T) and settled in Florida in 1962.  Upon his retirement in 1986, he established his own electrical company.  In 1998, he started a weekly bible study/worship service for the residents of Signature Healthcare in Gainesville and met with them for 21 years.  He loved his church, Northwest Baptist, and was a long-time member and deacon; he often visited those members who were in the hospital or homebound. Ralph was the proud father of Rebecca (Ed) Lovely of Williston, Karen (Fred) Bullock of Tallahassee, and Ingrid (Jeff) James of Baton Rouge.  He fiercely loved his grandchildren, Emily Lovely, Craig (Nicole) Lovely, Theresa (Tracy) Bullock, Angela (Ty) Poppewell, Jordan (Alison Rone) James, Kelly (Kayla Cucullu) James and Austin James.  He adored his 3 great-grands, Finn, Teddy and Charlie. Ralph was preceded in death by his brother, Nurmi. Visitation will be held Sunday, July 18, 3-5 pm, at Forest Meadows, 725 NW 23rd Avenue, Gainesville.  Graveside service will be held Monday, July 19, at 2 pm at Forest Meadows Cemetery West, 700 NW 143rd Street, Newberry.  In lieu of flowers, please make donations to Child Evangelism Fellowship, 2711 NW 6th St Suite F, Gainesville, FL 32609.