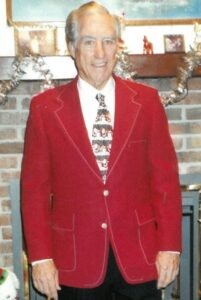 Raymond Collins Houghton, Jr., 94, died on October 29, 2022. He was a veteran of the Korean War as an Electronics Technician in the Navy Air Force ZP2 Squadron.

Mr. Houghton was born in Endicott, NY, worked in electronic at GE in Johnson City, NY and then started a career in computers as a systems analyst/programmer, followed by positions in computer management that took him to Anaheim, CA; Phoenix, Arizona; and Rogers, AR. He joined Bear Archery in 1978 as a manager of their computer department in Florida in 1978. He worked for the school board of Alachua County as a Systems Design and Programming Project Leader prior to retiring in 1991.

Mr. Houghton enjoyed many activities including golf where he acquired five holes in one, computer games, jogging, scuba diving and ballroom dancing. Prior to moving to Florida, he was a private pilot of his own airplane, enjoyed hunting and fishing. He was also a tremendous handyman who could come up with whatever was needed to get the job done. He was always willing to help anyone when called upon. Probably one of his greatest achievements was building his own home while holding down a full-time job. He was able to do this because of the home building training he received  from his father, a home builder, prior to entering the Navy.

Mr. Houghton was a Christian of the Protestant faith.