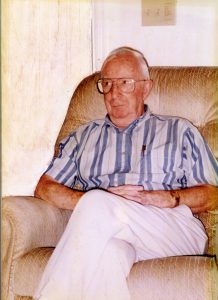 Raymond Eugene Morrissette, 103 years of age, passed away on November 28, 2021 at North Florida Regional Medical Center, in Gainesville, Florida. Mr. Morrissette was born on February 4, 1918 in Springfield, Massachusetts to Emilio J. Morrissette and Agnes Dupuis. He had an older sister, Doreanne, and a brother, Everett, all of whom are deceased. Raymond spent most of his life in Indian Orchard, Massachusetts. He attended the St. Aloysius parochial school, Myrtle Street Junior High, and the Springfield Technical High School, from which he graduated in 1935.

Mr. Morrissette was first employed by the Shannon Mfg. Co. in Springfield, MA, and served an apprenticeship as a diemaker which he completed. Following the demise of the Shannon Co., he was employed by the Chapman Valve Manufacturing Company in Indian Orchard, MA. Starting in the large machine shop facility he was selected to join the Tool Engineering Department where he eventually rose to Chief Tool Engineer.

During his early employment in the Tool Engineering Dept. he became active in union organizing. He founded the Engineering and Architectural Association, Local 112 of the American Federation of Labor and served as its first President, becoming one of the first technical unions in the state of Massachusetts. Later, as an organizer and spokesman, he founded technical workers unions at the American Bosch Co., and Perkins Machine Gear Co. Mr. Morrissette was employed at Chapman Valve for 27 years. He then worked
several years at the Warren Pump Company in Warren, MA.

In 1939 he married Yvette Couture and the couple had two children, Robert L. Morrissette of Three Rivers, MA, and Christine Morrissette Shurtleff, of Gainesville, FL,. His wife, Yvette, passed away on September 30, 2010. He is survived by his daughter.

During World War II, Chapman Valve was selected to do work for the Manhattan Project and the U. S. Navy. Following the Battle of Midway where our aerial drop torpedoes failed to perform, the Navy sought a facility to enable contour machining and designed the tools and fixtures including all processing for a successful effort of production. All of the unique efforts and designs for the shroud rings have been recorded in the Naval Undersea Museum in Keyport, Washington. When shipments of classified material arrived at Chapman Valve for supporting the nuclear projects, Mr. Morrissette developed and supervised the necessary tooling to machine the material which was later revealed to be uranium. He was exposed to uranium and developed skin cancers which continued to develop the rest of his life. On January 31, 2006 he received a maximum compensation under the Energy Employees Compensation Act.

He resided after marriage in Indian Orchard, Ludlow, and Wilbraham, Massachusetts for various periods and retired in 1970 to Ocala, Florida, eventually taking his residence in Gainesville, Florida, in 1996.

Ray and Yvette were avid boaters, members of the Westerly, Rhode Island, Yacht Club, touring New England coastal waters. They boated to the Chesapeake Bay and spent 1 ½ years there. The couple had traveled to Africa, Europe, and South America while visiting their daughter, Christine, and her husband, the Honorable Leonard G. Shurtleff.

Ray is remembered for his activities in building racing cars during the 1930-1940 period for racing on the New England dirt tracks and the Midget auto raceways. Flying from the Springfield, MA, Airport, he earned a private pilot’s license.

In retirement he created many museum quality replicas of WW I aeroplanes in small scale. Ray donated 21 to the U. S. Naval Air Museum in Pensacola, Florida, where they are on permanent visitor display. Model building from scratch continued to be an effort he pursued until he passed away.

There are no plans for any local service or gathering. Interment will be in the family plot in St. Aloysius Cemetery in Indian Orchard, Massachusetts.