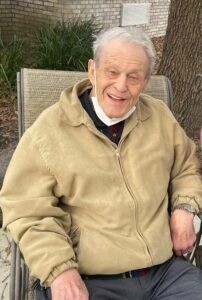 Funeral services will be held at Westminster Presbyterian Church on Monday, June 27th at 11:00am with Rev. Dick Mansel officiating. Funeral arrangements are being handled by Forest Meadows Funeral Home.

Dalton was born in Bogalusa, LA to Dalton Robert Burch and Viola Mae Sibley Burch on October 5th, 1931. He married Ann Gay Estes on September 15th, 1953. He went on to
graduate from New Orleans Baptist Theological Seminary and was ordained by the First Baptist Church of McComb, Mississippi.

He served as President of the New Orleans Federation of Churches and the Gainesville Ministerial Association. Over his seventy years in the ministry he served churches in Mississippi, Louisiana, and Florida, retiring in July of 2017. He was a long-time member of the Rotary Club of Gainesville, FL and was honored by his fellow Rotarians with the Paul Harris Award for his work with Rotary Foundation Scholarship recipients. He enjoyed hunting in Texas and discovering excellent wines.

Dalton is preceded in death by his Father, Dalton Robert Burch, his Mother, Viola Mae Sibley Burch, and his brother, Meredith Sibley Burch.