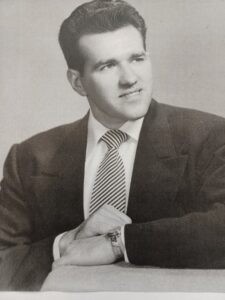 Richard G. Roskos, 94 of Gainesville, FL. passed away on Wednesday, August 24th. Richard was born in Pittsburgh, PA and moved to this area in 1995 from Ohio. Prior to his retirement, Richard was the Chief Engineer for Kettering Health Greene Memorial Hospital and he also served our Country in the Navy during World War II. He was a member of Queen of Peace Catholic Church.
Richard will be dearly missed by his daughter- Sofia McLean and husband Rod, son- Richard ‘David’ Roskos and wife Kathy, grandson -Ryan Moore and wife Danielle, and two great grandchildren – Marissa and Ethan Moore. Special thanks to family friends Jerry and Ralph Cellon and Martha and Frank Holton for their devoted support.
The funeral mass and Navy taps and flag presentation will be held on Friday, September 2nd, at 10:00 am at Queen of Peace Catholic Church with reception following the mass. All are welcome to attend and celebrate with the family.
Arrangements by Forest Meadows Funeral Home, Gainesville, FL. 352-378-2528.