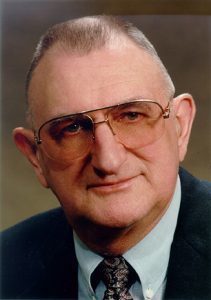 Richard Ralph Gutekunst, 92, passed away peacefully Saturday, July 7, 2018 with his family by his side. Dick was born in Allentown, Pennsylvania to George and Jennie Gutekunst.  He joined the Navy while a senior at William Allen High School in 1943 and served as a Pharmacist’s Mate during World War II, serving aboard amphibious ships in both the European and Pacific theatres, including operations during the Normandy, Philippines and Okinawa invasions.  He married the love of his life, Anna Fetterman, in 1946.  After attending Muhlenberg College for two years, he transferred to the Philadelphia College of Pharmacy and Science, earning his degree in bacteriology in 1951.  Recalled from the U.S. Naval Reserve due to the Korean War, he was subsequently commissioned an Ensign in the U. S. Navy Medical Service Corps.  While serving in the Navy, he earned an MS and a PhD from Cornell University.  His Navy duty stations included Fort Dietrich, MD; Naval Training Center Great Lakes, IL; Naval Research Unit Cairo, Egypt; National Naval Medical Center Bethesda, MD; and Marine Corps Base Camp Lejeune, NC.  After retiring from the Navy in 1968, he was a professor and dean at Hahnemann Medical College and Hospital in Philadelphia.  In 1980, he became Dean of the College of Health Related Professions at the University of Florida, at which time he was transformed into a rabid supporter of all Gator sports.  He retired from the university in 1995.  He was a member of First Lutheran Church and Rotary.