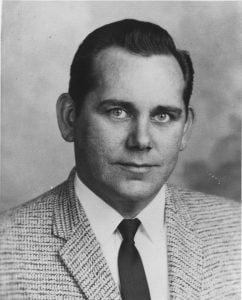 The world lost one of the greats in the early morning of July 16, 2021. Robert L. Streitenberger was born in the small town of St. Marys, WV, right by the Ohio River on April 11, 1925, and went on to live a life made for the Silver Screen. Losing his mother when he was only a toddler, Bob lived with his grandparents in WV for most of his childhood, enjoying home-cooked meals most of us could only dream of. He left that life behind to fight in the Pacific Theater of World War II, finding himself at one point on the island of Iwo Jima, which led to him meeting the great love of his life, Dorothy Thomas Streitenberger, who was his nurse when he was shipped home. After stealing away with friends in the middle of the night to get married, Bob and Dorothy eventually settled in Hialeah (along the way, Bob played a bit of semi-pro football and worked in a zipper factory), where he owned multiple beauty shops and worked as a beautician while Dorothy continued her nursing career. This very modern couple raised two girls, Karen Sue and Michele Lee, there until they moved to Williston after the girls were grown. Having come from the Miami area, Bob ended up opening the trendiest hair salon in town and quickly gained a name for himself.  His love of golf and great business sense led him to be the very successful president of the Williston Country Club. After Dorothy’s passing, Bob lived with his daughter, Karen, in Gainesville, where he met his girlfriend, Margaret Pettigrew, and all his pool lunch bunch friends. He was and will always be greatly loved and admired.

Bob is preceded in death by his beloved wife, Dorothy; his son-in-law, William Gerstner; his grandson, Robert Gerstner; and his granddaughter, Bonnie Gerstner. He is survived by his daughters, Karen Pearce and Michele Gerstner; his grandson and his family, Jeff, Pam, and Finnegan Parker; his granddaughter and her family; Laura, Henry, Anneka, and Rhys Rosenbrock; his granddaughter and her son, Brandy Panega and Archer James; his grandson, Eric Gerstner; and his girlfriend, Margaret Pettigrew. Family and friends will gather Wednesday, July 21, 2021, 2:00–3:00 p.m. at Forest Meadows Funeral Home, 725 NW 23rd Ave, Gainesville, FL 32609. Funeral service will be held at 3:00 p.m. in the chapel. Burial to follow at Forest Meadows Memorial Park East, 3700 SE Hawthorne Rd, Gainesville, FL 32641.