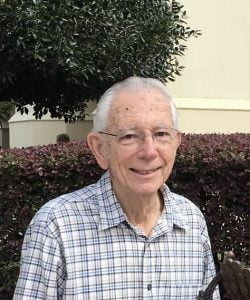 Roger Lawrence Cox, age 88, of Gainesville FL, passed away peacefully in his home, surrounded by family, on September 30th, 2021, after a long battle with cancer.

Roger was born January 5th, 1933 in Miami, Florida to Harold Philip Cox and Effie Mae Hinson Cox. He graduated from the University of Florida with a bachelor’s degree in Electrical Engineering, and went on to work for RCA, Unisys, and IBM throughout his career, focusing on computer development. Roger was an active member and past president of the Gainesville chapter of the Sons of the American Revolution (SAR). He loved woodworking and was a longtime member of the Gator Whittlers carving club. He was active in the Methodist Church over many years, teaching youth and adult Sunday School and doing mission work. He was affectionately known as the “PopPop of the playground”, when picking up his granddaughters after school.

He is survived by his wife of 62 years, Marion Reasner Cox, and his daughter, Linda Cox Eckenrode (Howard W. Eckenrode), and was predeceased by his son, Lawrence A. Cox (Diane Cox Wilson of Omaha, NE). He leaves behind two granddaughters, Jennifer Ebbeling Singleton (G. Matthew Singleton), and Kristin L. Ebbeling, who were the joy of his life! He is also survived by his sister, Nancy Mae Cox Pipkin, of Towson, MD, as well as many nieces and nephews, and other extended family members and friends who are like family.