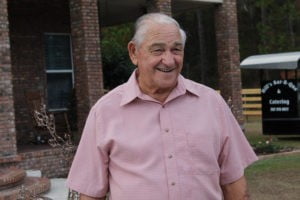 Samuel Wayne Floyd, 84, of Gainesville, Florida passed away peacefully on Thursday, June 22, 2017, surrounded by his loving family. He was born December 10, 1932, in Dozier, Alabama to Sam and Myrtle Floyd. A three-star athlete in high school, he attended Auburn University on a football scholarship. After an injury ended his football career, Wayne attended Troy State College where he met and married the love of his life, Tina Jones of Wilcox County, Alabama. They were married on March 26, 1954.
After serving two years in the army and coaching high school football in Alabama, Wayne, Tina, and their three children settled in Gainesville in 1966. There, Wayne was the head football coach at P.K. Yonge, while earning his Masters Degree from the University of Florida and working toward his Ph.D. He worked as an administrator for the Alachua County School System and Santa Fe College, retiring in 1995.
Wayne loved the outdoors. He could often be found working on his farm, fixing something at his lake house or tinkering in his barn. He lived each day to his fullest, always looking forward to the next project. Wayne was a strong man who believed in hard work and was always willing to lend a helping hand.
Although he was always busy with his many projects, his greatest joy was spending time with his wife, Tina, their three children and six grandchildren. Wayne was the consummate family man; his happiest times were when his home was filled with his entire family.
He is survived by his wife of 63 years, Tina, son Michael Floyd, Gainesville (Mary), daughters Melissa DiMarco, Orlando (Mitch), and Monica Barrett, Ponte Vedra; six grandchildren Katie, Matt (Christine), Megan (Matt), Patrick (Kirstin), Sam and Jack; two great-grandchildren Weston and Paige and a great-granddaughter due in November; sisters Martha Duncan, Marietta, Georgia and Marguerite Hughes, Troy, Alabama (Max).
He was preceded in death by his parents Samuel and Myrtle Floyd and two sisters Carolyn Dunn (Henry) and Gwendolyn Donaldson (Harold).
Wayne was an ultimate Southern gentleman who treated everyone he met with respect and kindness. He will be missed by all who met him.
Funeral services will be held at 11:00 a.m. on Monday, June 26, 2017, at Forest Meadows Funeral Home Chapel, in Gainesville. Private interment to follow at Forest Meadows Memorial Park Central. A visitation will be held from 7:00 to 9:00 p.m. on Sunday, June 25, 2017, at Forest Meadows Funeral Home Chapel, 725 N.W. 23rd Avenue, Gainesville.
In lieu of flowers, Wayne’s wishes were that donations be made to Covenant Church. Arrangements will be handled by Forest Meadows Funeral Home.