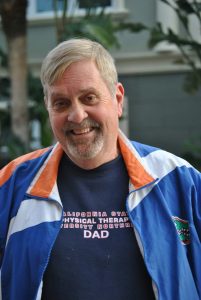 Scott Anthony Nelson was born in Red Wing, Minnesota to parents Robert and Anita Nelson. Shortly after a tragic car accident that took his father when he was 6 years old, Scott and his two sisters Bobbie and Becky, their expecting mother and maternal grandparents, all moved to Bradenton, Florida for a new beginning.

Soon his baby brother Steve was born and the family reveled in the joy of this new sibling. Scott adapted to all of this easily, and made friends, remained very loyal to his family, especially his mother, and kept everyone light hearted with his corny humor and unending puns. He played sports as a kid and had a keen interest towards music at an early age, largely due to his father being a very successful musician.  He was in a few bands in high school and even played with some of the original members of  The Allman Brothers Band.  He graduated from Manatee High School and followed his family to Gainesville for college.

It was here that he married a woman named Linda Boone and both of them graduated from the University of Florida deciding to reside in the Gainesville area to start their careers and family.  They first had their son Jeff in 1975 and five years later had a daughter they named Katrina. He continued to play his guitar regularly and loved to be around and play music with his younger brother who was an accomplished drummer, band member, and occasional backup drummer for Tom Petty’s group which at that time was called The Epics and later became Mudcrutch.

Scott started off his work career with Nationwide Insurance company and ended working in real estate for the majority of his career as an appraiser who owned his business. He was a loyal and dedicated Gator football season ticket holder and a fan of all other sports that he often attended at the college.  He was a very proud father who made sure his children had the best opportunities he could provide for them to enrich their lives and shape their values and independence.  He was also a reliable support to the other members of his family when they were in need. Later in life he enjoyed the company of his girlfriend Pam and their walks, frequenting the beach and traveling all over to visit with family and friends.

He was a lover of life and enjoying it to the fullest. He had a heart of gold with a special fondness assigned to his beloved grandchildren.

He was always there for sound advice, a laugh, a song, a political or social discussion, a smile. He treasured good music and his friendships within the music community,  jamming with friends, a guitarist and songwriter himself.

He put the Dad in dad jokes.

His light and energy left a positive and lasting impact on anyone he met. He was that person with whom you made a genuine connection and instant friend upon first meeting.

He was thoughtful and considerate, intelligent and funny, honest and down to earth, sincere and accepting; the kind of person you would be honored to call a father, grandfather or friend.

Suddenly and unexpectedly just after his 70th birthday, he passed away in Gainesville on December 28, 2020. He was surrounded by his loving family and girlfriend in his final days.

This world lost a true gem but his legacy will live on in the memories, music and love shared with those around him. He is survived by sister Bobbie (Dennis) Damiano, son Jeff (Gretchen) Nelson, daughter Katrina (Fintan) Vargas and grandchildren Luke, Leo, Finn and Ana, nieces Christiana, Sheryl, Shannon, Regina, Shelley and Juliana and nephews Austin and Victor.

He is also survived by Pam Descoteaux and her family with whom he grew to love including her brother Dan Osborne and his family, children Greg and George Griffith, granddaughter Samantha Griffith (Josh) and great grandchildren Isabella and Isiaha.

A memorial service will be held at Forest Meadows Cemetery Central 4100 NW 39th Ave in Gainesville on Friday January 15th, 2021 starting at 1pm for in person and at 2pm for virtual attendance.

In lieu of flowers please consider a donation to the Surfrider Foundation (surfrider.org) or plant a memorial tree (alivingtribute.org).