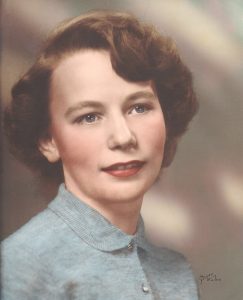 Shirley Anne Bagnall, 87, of Gainesville, Florida, passed away on January 14, 2022 in Gainesville.

Funeral service will be held at First Lutheran Church of Gainesville on February 26 at 10:30 a.m. with Pastor John Glover officiating. There will be a reception after the service. Burial is at Evergreen Cemetery in Gainesville. Forest Meadows Funeral Home is handling the funeral arrangements.

Shirley was born in Miller, South Dakota to Sadie and Marcus Von Ahn on February 27, 1934. She moved with her family to Junction City, Oregon when she was 2 ½, then to Eugene, Oregon, then to Cascade Locks, Oregon, where she graduated from high school. She attended business college in Portland, Oregon, before moving to Milwaukee, Wisconsin to seek her fortune.

In Milwaukee, she met and married Larry Bagnall and had three of her four children prior to the family’s sojourn in Ithaca, New York, where Larry earned his PhD and Shirley wrote (typed) his thesis. Their fourth child was born upon their return to Wisconsin. The family moved again in 1969, this time to Gainesville when Larry became a faculty member at the University of Florida.

Shirley put down roots in Gainesville and her residence here was uninterrupted, except for a three-year mission to Dschang, Cameroon with Larry under the sponsorship of US AID. While in Cameroon, Shirley was a fixture in the church and social life of Dschang.

During her working life, she was a bookkeeper for several different small businesses. She also spent many years as a housewife and doing volunteer work. She volunteered in her children’s school and extracurricular activities. She served in the Alachua General Hospital auxiliary for many years. She loved making quilts and school kits for Lutheran World Relief. She made bookworms for the Alachua County public schools to use as prizes for reading. She was a member of First Lutheran Church of Gainesville, and participated in various volunteer activities at church, including serving as a Sunday School teacher and in the church office.

In lieu of flowers, memorial donations may be made to Lutheran World Relief, PO Box 17061, Baltimore, MD 21297-1061. Condolences may be left in Shirley’s online guestbook at [link from Forest Meadows].