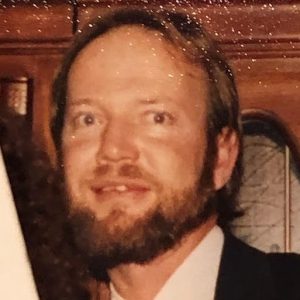 Stephen Algeo was born on October 21, 1953 in Springfield, Ohio, the son of Charles Dean Algeo and Nell O’Neal Algeo.

Steve moved to Sarasota, Florida, at the age of 12, when his father retired. Steve graduated from Riverview High School in Sarasota in 1971. He continued his education with four years of apprenticeship school, studying to be an electrician. He was a state-licensed electrical contractor.

Steve married Mary Ann Blankenship on September 24, 1977 at First Presbyterian Church of Sarasota by the Rev. John LaMotte. When they met, Mary Ann had been planning to move to Gainesville to go to art school. They met through a mutual acquaintance at the Red Carpet Inn in Sarasota. Steve asked her to dance and they later went to Brewmasters together. Mary Ann soon left town to pursue her plans. Steve wrote her letters and then visited her repeatedly in Lake Butler, where Mary Ann was living with her mother. One weekend he came up to see her and took her home to Sarasota with him – and married her.

Daughter Melissa Ann was born in 1979. When he came to the hospital to take Mary Ann and Melissa home, he brought a gift for each of them – dresses that he had picked out. The day Dean was born, Steve was about to walk out of the house to go to work, when Mary Ann said, “Maybe you shouldn’t go, because I’m going to have a baby.” Dean was born an hour later.

When the kids were small, the family used to go out to the beach at Casey Key, near Sarasota. He’d tease his nephews and nieces that they were going to catch dolphins so that all the kids would go
swimming with him, which he loved. The kids seemed to love it, too.

The family moved to their property near Archer, Florida (near Gainesville) in 1984, so that Mary Ann could care for her ailing father. They bought land in Grassy Lakes Estates. After work and on weekends, he built the family’s home on their property – a four bedroom, 2500 square-foot house. They moved in
in 1996.

Steve worked as an electrician before founding his own company in 1990. He called it Craft Electric because he took pride in his work as a craftsman. Most of his work involved electrical contracts with the University of Florida.

Steve’s favorite spot was in his man cave at the house. Shortly after the house was finished, Mary Ann was out of town on business. She called Steve to check in, and Steve said he and his friends were putting footers in the driveway for a gazebo. She was delighted, and thought it would look nice. When she came home, she was surprised to find what became known as Steve’s “man-zebo.” It eventually was provisioned for the guys with dual grills, a refrigerator, a television for football games, and ceiling fans. They enjoyed many gatherings there.

Steve was a sports fan of many stripes. If you could throw it, bounce it, roll it or kick it, Steve wanted to do it, or at least watch it. He was a devout Florida Gator and he and Mary Ann had season tickets to Gator football games and, during the Billy Donovan era, to basketball games as well. His other hobbies included watching western movies and reading romance novels.

When his first grandchild, Sophie, was small, Steve asked her what she would call him. He told her some people called him Pops, so Sophie said, “I’m going to call you Pops Daddy!” That’s what Sophie and her brother called him from then on.

Steve is predeceased by both his parents; one brother, Charlie; a sister-in-law, Julie; and two brothers- in-law, Dave Nachtrieb and Larry Burlisle.

A memorial service will be held Saturday, June 26, 2021 at 10 am at Queen of Peace Catholic Church in Gainesville.