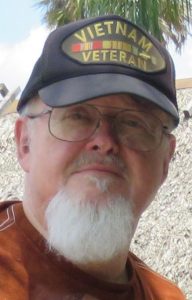 Steven Lee Kane, age 73, of Ocala, Florida died March 20, 2021.  Steve was born August 8, 1947 to Sgt. James Patrick and Shirley (Garman) Kane in Newport News, Virginia.   Since his father was in the military, he lived in Arizona, Tacoma, Washington and Florida before settling in Maryland.  Prior to moving to Ocala, FL in 2006 he resided in Edgewater, MD

Steve graduated from Surrattsville High School in Clinton, MD and had an AA in computer science.  He served in Vietnam as an Air Freight Specialist and Photographic Repairman achieving the rank of Sgt. in the USAF.  He worked for Ryder Logistics for 35 years in the trucking industry.  Steve enjoyed doing the community newsletter, fishing, target shooting and computers.

Steve was an honest, caring and loving person.  In 2004 after surviving cancer he wanted to give back and started volunteering as a Santa.  After moving to Ocala and retiring he called himself a “computer hobbyist”.  He enjoyed solving problems, for the HP forums where he was a volunteer expert and helping residents in his community with their computer problems. He rebuilt donated computers and gave them to people in the community or churches.  Several years through HP, he donated a new computer to a deserving senior at Trinity Catholic High School.

Funeral Services will be held Tuesday, April 6, 2021 at 1:00 p.m. at Florida National Cemetery in Bushnell.