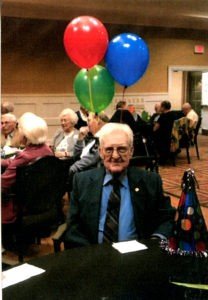 The Honorable Judge, James Carroll “JC” Henderson, age 98, died on Monday, October 21, 2019 at the ET York Haven Hospice Care Center in Gainesville, FL. He was born to the late Noah Webster and Pearl P. (Matthews) Henderson in Ashford, AL. Judge Henderson’s family relocated to Gainesville, FL where he attended Gainesville High School. Judge Henderson completed his undergraduate studies at the University of Florida, B.S. in Business Administration, in 1943; followed by service in the Second World War (1944 and 1945) in the United States Army Field Artillery, serving in the United States and European. Following his Military Service in the US Army, Judge Henderson entered the University of Miami Law School and graduated Cum Laude in
1950. Judge Henderson practiced law in Dade County. His incredible range of legal experience is evident in the fact that his public law career began in the Prosecutor’s Office in 1954 as a County Solicitor, followed by his appointment as the first Public Defender in Dade County in 1958. In 1962 Judge Henderson was appointed Judge of Industrial Claims, called a Deputy Commissioner in
those days, and in that capacity served with distinction for eighteen years to include his role as President of the Florida Conference of Industrial Claims Judges in 1978 and 1979. In 1980 Judge Henderson was appointed by Governor Bob Graham to the Circuit Court. While serving at various times in the Family Division, the Criminal Division, and General Jurisdiction Division of the Circuit Court; Judge Henderson’s primary assignments over the decade have been in our Delinquency and Dependency Courts. Judge Henderson’s tenure in the juvenile justice system has represented the pinnacle of a uniquely distinguished career. He was a student of the law, keeping up with every single decision that came down from Tallahassee. Judge Henderson had an uncanny memory as he could recite the facts of practically every single case with which he had been associated. Yet it was not only Judge Henderson’s experience and knowledge of the law that contributed to the universal admiration and respect that he received from all who worked with him. Judge J.C. Henderson was more than a uniquely qualified jurist who served his community with dedication and integrity for more than the past half century. While he has and will always be admired for those tangible experiences and characteristics, he will always be regarded primarily as a uniquely compassionate and caring human being. His kindness, generosity, and warm humor lifted him from his well- deserved rank among eminent jurist to an equally well-deserved rank among beloved human beings. Final Care is entrusted to the Forest Meadows Funeral Home & Crematory, 725 NW 23 rd Avenue, Gainesville, FL. 32609. In Lieu of flowers, memorial donation in Judge Henderson’s honor may be made to SOBE Cats Spay &amp; Neuter, Inc. a 501c3 based in Miami Beach that supports the stray community cat population. Donations can be made online at www.SOBECats.org or mailed to 428 Childers Street, 24180, Pensacola, FL 32534.