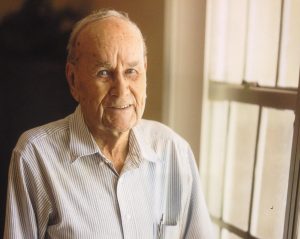 Tilden Counts Booth, 105 years of age, of Gainesville, Florida passed away on Monday, September 13, 2021, in Gainesville. The family will receive guests at Forest Meadows Funeral Home on Friday, September 17th from 4:00 to 6:00 PM. A Celebration of Life service will be held at 2:00 PM on Saturday, September 18th at Suwannee Holiness Campground, 9946 SE 142nd Blvd, White Springs, FL. The burial/Interment will follow at Forest Meadows Cemetery located at 4100 NW 39th Ave., Gainesville. Counts was born in Rockledge, Florida to William Mitchel Booth and Nannie Ramsey Booth on August 11, 1916. His mother died during childbirth with him, and he and his brother were raised by his paternal grandparents who became a great spiritual influence in his life. He moved to Gainesville at an early age, and this is where he lived out his life.  In 1939 he went to work for the University of Florida, but in 1941 the Navy called him up for duty. He served for 4 years in the South Pacific. When he returned from overseas, he went back to the University where he worked until his retirement in 1979.  In 1946 he married his sweetheart, Alma Murrhee. They had been introduced by a mutual friend before he went into the service, and they had corresponded while he was overseas. While on leave, he visited her where she was attending nursing school in Nampa, Idaho and had asked for her hand in marriage. They had a beautiful life together and were blessed with four daughters. Counts was a devoted Christian and he believed in serving others. One way he did that was through his love for a hallowed place called Suwannee Holiness Camp. He poured himself into those grounds through the years and never wanted to miss a camp meeting or retreat. Counts served in many capacities in his local church, First Church of the Nazarene. He was a good churchman and helped wherever needed, whether it be maintenance work, driving a bus, teaching a SS Class, singing in the choir, etc. Counts was a member of the Gideons. He served for 58 years helping to distribute Bibles and speaking the Word of God. He was a beloved husband, father and grandfather who loved his Lord, his family and his church. Counts is preceded in death by his wife, Shelly Alma Murrhee Booth and a daughter, Patricia Dian Booth. Counts is survived by his three remaining daughters: Yvonne Booth of White Springs, Joan Booth Mills of Archer and Marianne Booth Webb (R. Todd) of Texarkana, Texas; Six grandchildren- Robie Counts Mills (Rebecca), Scott Daniel Mills, Dana Lynn Walters (Mark), Garen Webb, Tanner Webb (Hailey), Lanson Webb and sixteen great-grandchildren. In lieu of flowers, the family asks that donations be made to Suwannee Holiness Camp: Suwannee Holiness Camp c/o Tricia Snellgrove – Camp Treasurer PO Box 15861 Panama City, FL 32406