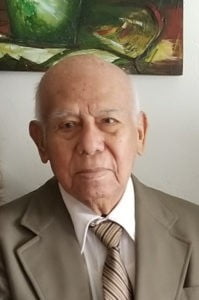 Born and raised in Paiján, La Libertad, (PERU), the son of José Arturo Alza Portilla and Ascensión Sipirán Senador, he was a resident of Trujillo, Perú until 1994 when he started to travel back and forth Gainesville, FL, to visit her daughters, sons, and grandkids.

In his early years and during his elementary and middle school at his native Paiján, he used to help with the farming labor at his father’s lands. It was during these years when, according to his own words, he “fell in love with the agriculture and farming affairs”. He continued his education in Trujillo, graduating from San Juan High School to immediately start attending the Trujillo National University, graduating in 1946 with a Master in Chemical Engineering. He met his wife, Rita Rodríguez del Castillo, while he was working for the Mining Copper Corporation and they were married in 1948 at the “Iglesia de los Desamparados” in Lima, Perú.

Since then, he started an ambitious personal and professional project characterized by hard ethical work and an impeccable behavior characterized by high levels of compromise and professionalism. Several american mining corporations with branch offices in Perú, peruvian fishing industry and manufacturing companies received the benefits of his proficiency and expertise as a Chemical Engineer and as a Senior Manager. He also worked for a few years as a College Principal Professor in the Chemistry field.

A person of action rather than words, Víctor dedicated his leisure time to his two main hobbies: his family and gardening (agriculture substitute). He spent quality time with his wife and children leaving a legacy of integrity and hard work lead by example, together with neat and beautiful gardens.