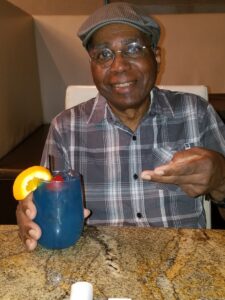 With our deepest regrets we announce the passing on August 2, 2022 of our beloved Walter McKinley Jones, Sr.
Walter was born on September 4, 1941 in Columbus, GA. He was the son of Earl Jones, Sr and
Paulette Hutchinson (both deceased).
Walter was a graduate of Lincoln High School in Gainesville, FL, Class of 1960. He earned an
associate degree from Santa Fe College and also attended University of Florida. He faithfully
worked for 40 years at the University of Florida in the Food Science and Human Nutrition
department as a tech and graphic artist. Walter proudly served his country in the United States Army.
Among his favorite pastimes were photography and music. He always had a way of making
people smile and did so especially through his photos and music.
He brought joy to everyone he met and his kindness will be remembered by all the
lives he touched throughout the years.
He will be dearly missed by his wife of 57 years, Annie Jones, son Walter M Jones, Jr, daughter
Angela Jones Medina (Frank), grandchildren Regina Ann and Anthony Michael Medina, sister
Judy Gillard and brother, Earl Jones, Jr and a niece and nephew. Special thanks to family
friends Eugene Crawford, Percy Flowers, and Carolyn and Levi Colton for their support.
Funeral Services will be held on Friday, August 5, 2022, at 11:00 am
Forest Meadows Funeral Home Chapel followed by interment
with full military honors at Forest Meadows Cemetery East.