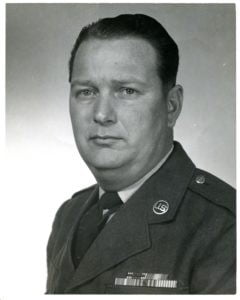 Wilbur Lonzo Jordan was born in Gaitor, Florida, on February 03, 1928 to Elias Lonzo and Mabel Lewis Jordan. Wilbur grew up around Dunnellon, Florida, graduating from Dunnellon High School in 1945. He joined the Air Force and served as a Logistics Management Specialist in both the Korean and Vietnam Wars.  While at Warner Robbins AFB, Wilbur met and fell in love with Geneva Posey, a young nursing student, in Macon, Georgia. They were married on December 22, 1954 and enjoyed 64 wonderful years together.  Wilbur went to be with the Lord on April 17, 2019.

As a result of Wilbur’s military service, he served in many capacities as a layman in churches throughout the world. His strong faith guided his life with a passion for Southern Baptist missions. Family and friends were also an important part of Wilbur’s life.  He looked forward to family gatherings, and spending time with his children, grandchildren, and great-grandchildren. Everyone that knew him appreciated his sense of humor and love of a good joke.

Wilbur was a man with many interests.  Until he lost his eyesight, Wilbur loved hunting and fishing.  He was active in the VA Blind support group, and was a member of the Masonic Lodge, R T Schafer Lodge #350 in Gainesville. Throughout his life, Wilbur was active in many church roles such as teaching Sunday School for both junior boys and adults, starting Brotherhood groups, working with RA’s, and serving as Sunday School Director and Church Treasurer.  With a group of like-minded Christians, he and his wife helped start Northwest Baptist Mission, which eventually became Northwest Baptist Church. Wilbur remained an active member throughout the rest of his life serving as an ordained deacon. After losing his eyesight, he was designated Deacon Emeritus.

Wilbur is survived by his wife, Geneva, and their two children: Glenn (Debbie) Jordan of O’Fallon, Illinois; Denise (Erick) Thompson of Gainesville. Wilbur leaves behind 5 grandchildren and 5 great-grandchildren. He is also survived by his brother, Louis (Pat) Jordan of Dunnellon, and many nieces and nephews. Preceding him in death are his parents, his brother, Harold, and sister, Mabel Ann.

Visitation will be at Northwest Baptist Church on Thursday, April 25 from 10-11 AM. Funeral services will follow at 11:00 AM with burial at Forest Meadows Cemetery Central.  In lieu of flowers, the family requests donations to Florida Baptist Disaster Relief or the Florida Baptist Children’s Home.