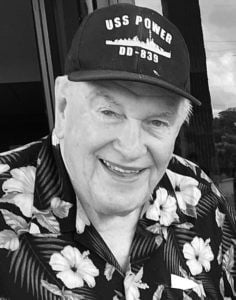 William Espy Barker, 95, peacefully passed away in his sleep on Saturday, March 14th, 2020 at 12:07 a.m., at his son’s home in Gainesville, Florida. He was surrounded by family and friends during his final two weeks. Mr. Barker was born in Sandy Lake, PA on June 16, 1924 to Espy and Nell Barker. He was a 1948 graduate of Houghton College, where he met his wife, Ruth Donley, whom he married on July 1, 1947. On July 1, 2017, Bill and Ruth celebrated with a family party their marriage of 70 years. He had a life-long devotion to his Lord and Savior. While living in Rochester, NY, Mr. Barker and his family were members of Brighton Community Church, and later in Gainesville, they were members of Faith Presbyterian Church. In Rochester, he worked for Xerox before he entered the field of education, later becoming Science Department Head at Greece Olympia High School, and Principal at Autumn Lane Elementary, and Batavia High School. In 1967, he and his family of five took a trip around the world to study foreign educational processes. In 1982, he and Ruth moved to Vero Beach, then Gainesville, where he was principal of Heritage christian School. In his 80’s and 90’s, he delighted in teaching English as a second language to university students. Bill will be remembered for his unmatched wit and humor, his passion for the injustices of the world, wisdom, and his love of his family, friends and his Lord and Savior. As the Superintendent of his school district said of him at his retirement: “Who else will submit
to so many annual pies in the face at pep rallies,…and who else will live an exemplary personal life and offer so much of himself to the youngsters he serves, but will also gently suggest to those same youngsters who desperately need a fixed star of hope in their lives, the promise of helping them find Jesus Christ in their tangled lives? A rare human being has passed our way; how fortunate for all of us.” Mr. Barker is survived by his sons Bill (Lois) and Checker (Gloria), daughter Laurie (John), grandchildren Amy (Ryan), Michael (Lorrie), Janna and Kailey (Ryan), and 5 great grandchildren (with a sixth on the way). He is preceded in death by his wife and by his brother, Chester Barker of Rushford, NY. Due to COVID-19, the funeral will not be held immediately, but be held during the first week of June at Faith Presbyterian Church, 5916 NW 39 th Ave, Gainesville, FL 32606.