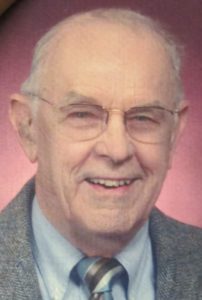 He grew up in Pennsylvania where he enjoyed trapping muskrats with his dog, Buff. After graduating from high school, he attended the Pennsylvania Maritime Academy, earned a Second Mate License and served in the Merchant Marine during WWII, in the dangerous war conditions of the North Atlantic, helping to supply Allied forces.

Bill married Fay Elizabeth Horner, August 4, 1949 in San Francisco, while serving in the Navy. During the Korean War he served on the minesweeper, the USS Shoveler as Full Lieutenant and Executive Officer. After the war, he graduated in Political Science from Lehigh University in 1956.

Bill and Fay moved to Florida with their two sons in 1956, eventually moving to Gainesville Florida, where his daughter was born. He earned a Master of Arts in Teaching from the University of Florida in 1966.

After employment at the University of Florida in Urban Planning, Bill worked at Lake City Community College (now Florida Gateway College) in the Park Technology program until his retirement in 1993.

An avid reader, student of history, philosopher, hearty singer, and dog lover, Bill fully came to faith in Jesus Christ in 1977, was baptized in 1984, and gained a love of scripture and prayer that lasted the rest of his life. A gifted mentor and encourager, he guided many who sought his counsel. He worked for Comfort Keepers during his retirement, and volunteered at the Micanopy Historical Museum, a faithful docent for many years until 2017.

Bill was known for his loyalty, resonant voice, welcoming smile, pithy sayings, friendly debates, optimistic outlook and dapper headwear. He enjoyed the outdoors his entire life, taking his family on camping trips to the national and state parks of the east and west coasts throughout his lifetime. He also enjoyed wood chopp ing and a crackling fire in his woodstove every winter.

Bill is survived by his wife of 68 years, Fay Alexander, his children Bill III, Jon and Beth, daughter-in-law, Ayleen, two sisters: Jean Heard and Marjorie Dean, and many nieces and nephews.

Arrangements are under the care of Forest Meadows Funeral Home, Gainesville, Fl.