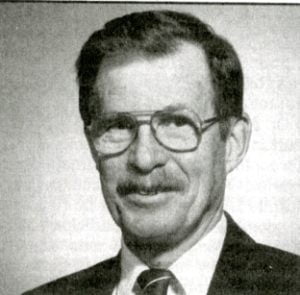 William H. Cutler was born in Delevan, Illinois on August 3, 1928. When he was very young the family having lost everything in the Depression, took over an old one room log cabin in the mountains of New Mexico.  His father hunted to feed the family, and made a monthly auto trip across the desert to Albuquerque for basics purchased with his fifty dollar VA disability check.  Life was simple and on horseback.  Even at that early age Bill was impressed enough to be able to relate many first-hand stories of life in the old west: of the Indians, the law-men, the animals, and “big men on big horses”.  He would laughingly refer to himself as the last of the wild-west homesteaders.

In 1940-1941, the family settled in Sarasota, Florida, via one year in Tarpon Springs. TS was fun because the sponge docks were still active, furnishing excitement for the young boy who came to town in a row boat.

He graduated from Sarasota High School in 1947. He enlisted in the National Guard in 1948.  He attended art school prior to college at Florida State University, where he received his BA in Speech Correction in 1953.  He worked in the Florida public education system for three years.  In June, 1956, he married Marie Gilbert.  The couple spend one year at Illinois State University in Normal, Illinois, where Bill received a Masters in Special Education, and then returned to Florida for three more years working in the public school system.  He was a member of a small group establishing special education programs in the state.

The PhD in Communicative Disorders was confirmed from the University of Southern California in 1969. While studying for the degree he interned at Children’s Hospital, Cedars Hospital, and the L.A. county hospital working with children.  Eventually he focused on adult hearing problems at the VA OP clinic in Los Angeles where he became acquainted with a number of Spanish American War vets and could relate to their firsthand stories.

In August, 1967, the family moved to Gainesville, Florida, where Dr. Cutler became Chief of Audiology and Speech Pathology of the newly opened VA Medical Center. He was an active member of the American Speech and Hearing Association (ASHA) and was instrumental in helping design and set up several VA outpatient clinics and sound suites throughout Florida. After retirement in 1994.

He worked with the Coast Guard, teaching boating safety courses, and after retirement took CG training in search and rescue and related topics. He obtained his captain’s license in 2002, and his Ship Masters license two years later and spend much enjoyable time in Florida waters, the Bahamas, and points south.

Funeral Services will be held at 11:00 am on Tuesday, September 18, 2018 at Grace Presbyterian Church, Gainesville with Rev. Charles Freeman officiating.  A private interment will take place at a later time.  Arrangements are under the care of Forest Meadows Funeral Home, Gainesville, Fl.