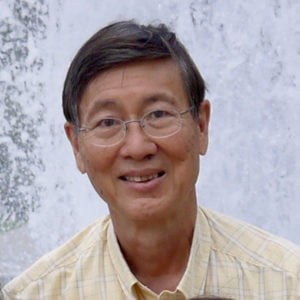 Professor Yuan-Chieh “Randy” Chow of Gainesville, Florida peacefully passed away at the age of seventy-one on May 21st, 2017 surrounded by his family.  He had been fighting leukemia.  Randy is survived by his wife, Taiying, whom he fiercely loved for fifty-two years; his two sons, Bruce and Wesley; two daughters-in-law, Wenyu and Jenni; four grandchildren, Ashley, Ryan, Josie, and Romy; two of his sisters and numerous cousins, nephews, and nieces.

Randy had a variety of interests, and his passion for the arts inspired his children and grandchildren to learn the violin and piano.  A lover of nature, he created wooden carvings from cypress knees and cultivated orchids in a greenhouse built with friends.  Randy loved fishing and boating, taking his sons and grandchildren out at every opportunity.

Randy was born in Chia-Yi, Taiwan on December 24th, 1945, the youngest of 5 children.  He was an extremely smart child with a broad knowledge of history, astronomy, geography, and science.  He attended the prestigious National Chiao Tung University in Hsinchu, Taiwan for his bachelor’s degree.  It was during this time that he met his lifelong partner and future wife, Taiying. They immigrated to the US and in 1971 married in Cincinnati.

Randy obtained master’s and PhD degrees from the University of Massachusetts, Amherst in 1977, studying the nascent field of computer science. After a four year stint at Wright State University as an associate professor, the family moved to Gainesville in 1981, where he began building the Computer and Information Science Engineering department at the University of Florida.  Over his thirty-one year career at UF, he supported and spent vast amounts of time coaching and teaching his students. Randy’s family and professional life was spent building a solid base from which generations of scientists and engineers, his sons included, pursue a deep understanding and appreciation of the world we inhabit. In 2012, Randy retired and was honored as a Professor Emeritus for his many years of service, dedication, and achievements.

Randy will be forever remembered as a loving, generous, kind, and inspirational husband, father, grandfather, son, brother, uncle, friend, colleague, and teacher.  He will be sorely missed.

A memorial service and visitation will be held at Forest Meadows Cemetery at 4100 NW 39th Avenue on Friday, May 26th at 3pm.  The family requests no flowers, but if you would like to make a donation in Randy’s memory, please help support the Leukemia & Lymphoma Society (www.lls.org).