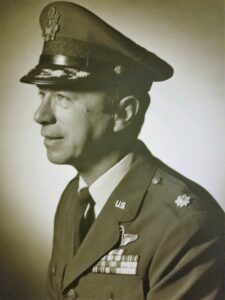 Joseph Henry Maurer was born on January 15, 1930 to Ruth Martin Maurer and Joseph John Maurer in
Pittsburgh, Pa. He graduated from Langley High School in Pittsburgh in 1948. After working in Pittsburgh
at the US Steel mill for a short while he enlisted in the United States Air Force and went through Airman
Basic Training at Lackland AFB, Texas.
After Basic training he went on to train to be an aircraft mechanic at Keesler AFB, Biloxi, Miss. following
that training he served as a mechanic at Brookley AFB Mobile Ala.; Haneda AFB, Tokyo, Japan; Andrews
AFB, Maryland and Washington National Airport, D.C. -where he was assigned as a mechanic on
President Eisenhower’s aircraft the “Columbine.”
Following that assignment, he was accepted to enter the Aviation Cadet-Radar Observer/ Navigatortraining program at James Connelly AFB, Waco, Texas. On completion of that training he was commissioned as a Second Lieutenant and was assigned to Elmendorf AFB, Alaska where he flew “back seat” in F-94 fighter jet aircraft. In January 1954 he received an assignment to Columbus AFB, Miss. to enter pilot training. Enroute from Alaska to Mississippi he stopped by Pittsburgh to marry the love of his life Dorothy E. McCurry. Married, they proceeded on their never-ending honeymoon to his pilot training. On completion of “basic” pilot training at Columbus AFB he was transferred to Vance AFB, Enid OK for “primary” Pilot training in T34
Trainer Airplane and B-25 Bomber aircraft. On completion of that training he was awarded the silver wings of an Air Force pilot, fulfilling his life time ambition.
He was then assigned to Randolph AFB, Texas for further “combat crew” training in B-29 bomber aircraft. On completion of that training he was assigned to West Palm Beach AFB, Florida for further flight training into KC-97 air-to-air refueling aircraft. He was then transferred to Westover AFB, Mass, for permanent assignment to the Strategic Air Command. He remained there for four 1/2 years. Next, he was assigned to Kindley AFB, Bermuda to fly KC-97 aircraft to refuel B-52 and B47 Bombers heading to Europe and beyond in the event of a war.
After three years at Kindley AFB he was transferred to Andrews AFB, Maryland to fly as an instructor pilot with a new duty as Air Base Wing Plans officer. He flew U-2s and C-54 aircraft in that assignment and was involved with War Planning. From there he was transferred to Bolling AFB to head up an Air Force Major Command plans and policy office. During that period, he attended and graduated from University of Nebraska, Omaha, in 1965 with a degree in Military Science. After four years in the Bolling AFB assignment he was transferred to Taipei, Taiwan to the Taiwan Defense Command. He was Director of Plans and Policy and worked with the Taiwanese Military General Staff to plan joint US and Chinese
military actions in the event of war between the Nationalist Chinese and the Communist, (mainland) Chinese. From there he was assigned to Vietnam for a short time. Then back to the States to Hamilton, AFB, San Francisco, Ca. He retired from the Air Force at Hamilton AFB in 1973 as a Lieutenant Colonel and returned to the Washington DC area and worked for the Metropolitan Washington Council of Governments coordinating Civil Defense activities throughout the DC, Virginia and Maryland areas. He went on from there to work as operations officer at Washington National Airport and then to the Gainesville Regional Airport as Operations Manager and Airport Manager before full retirement in 1985. Following retirement, he
volunteered for the International Executives Service Corps where he and wife Dorothy went to Albania, The Dominican Republic and Slovakia to consult with their governments to improve their airport systems. He was a member and president of the Gainesville Chapter of the Military Officers Association, member
and president of the Turkey Creek Golf and Country Club men’s golf association, a Board Member on the Lady Gator Golf Boosters Board, Gainesville Kiwanis Club and the Masonic Order (Seat Pleasant 218, in Maryland). He is survived by his loving wife Dorothy of 68 years, three children Joseph Michael Maurer (Cindy) of Montana, Thomas Robert Maurer (Susan) of St Petersburg Fl. and Julia Ruth (Hunter) Kent of Gainesville, Fl. Through the years he was blessed with the love of six grandchildren and seven great grandchildren.
He was predeceased by his parents and by his dear daughter Jennifer Leigh Maurer Clay. In lieu of flowers, memorial contributions in Joseph’s name may be made to the Shriners’ Hospital for
Children. [email protected] Please join us in remembering Joseph Henry at www.forestmeadowsfh.com